Review: Wellspring Shows the Power of Change with 'Unbound' 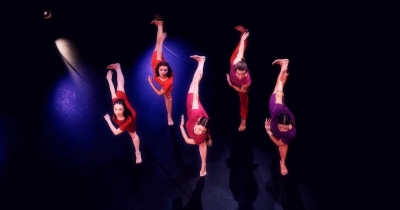 Two and a half weeks before Wellspring/Cori Terry & Dancers opened their first live, in-person performance since before the pandemic, one of the dancers tested positive for COVID-19, causing them to scrap one of the central dances they’d been rehearsing for “Unbound,” their fall concert of dance that opened Friday.

But the company rallied, and rapidly changed course. The dancers worked tirelessly to revive “Desideratum,” an extraordinary piece of choreography from 2012. None of the dancers had seen it, much less danced it, before; and yet in a few short weeks, they made it into a phenomenal highlight of the entire performance, one in which “the new life they’ve breathed into the dance,” as Founder and Artistic Director Cori Terry described it in a curtain speech, was evident to everyone in the room.

Terry said this experience gave her new hope. After the 40th anniversary season of her company was thwarted by the pandemic, she thought to herself, “Maybe there is a future for this ephemeral art form,” she said. “Maybe we have a chance to exist into the future.”

In fact, the company has never looked better. Though all but one of the five dances in “Unbound” was recycled from the past, Terry’s well-worn choreography feels new again as translated by this largely new, young company of five very strong, unique dancers whose interpretation and translation of the movement is bold and powerful.

The hour-long performance (including intermission) was bookended by bright, lively pieces set to infectious music by the Red Sea Pedestrians Klezmer music.

The show opened with Marisa Bianan’s “Take Back the Sun” in which four dancers dressed in red and purple built from the ground up incredibly energized dancing that mirrored the build in speed and energy from the music. They moved expansively, running and leaping, often with arms outstretched.

The choreography reverberated the closing piece, Terry’s aptly-named “Old World New” from 2013, in which the four women and one male dancer in fiery jewel-toned costumes by Patricia Plasko offered expansive, angular movements within which were contained several pas de deux.

And what took place between these two dances offered a glimpse at the range of emotionality and technical skill of this fine company.

Andrew Niedbala’s solo performance of “Refracted,” from 2001, deepened into themes of yearning and tension. As he arose from the ground with great tension, the music and lighting by Samantha Snow changed dramatically, from nature sounds to Maria Callas, from moody to bright. Full of interesting balances—on one leg, on one hand, on shoulders—Niedbala’s expressiveness was profound yet impressively subtle through his nimble, lithe body. And the continuing motif of outstretched arms left no doubt that yearning was a central theme.

But it’s “Desideratum,” the late addition to the concert, that leaves the most indelible mark. Set to Philip Glass’s dramatic “Symphony No. 3 Mvt.” the dance is one of Terry’s most classically balletic pieces yet also quite modern. A sort of pas de quatre reminiscent of Le Corsaire’s Jardin Animé as well as the ghost-like Wilis of Giselle, the four women use the chiffon overlay of their skirts as props to veil themselves in a recurring motif that provides the beginning and ending tableaus. They work with their costumes in arabesque, emphasizing exquisite lines, extensions, and turns, gliding, sliding and lifting, sharing weight in a wildly dramatic and incredibly athletic, gorgeous display.

It’s wonderful to see a 41-year-old company reinvent itself with a revitalized company that can breathe new life into old material, truly making it new (to borrow Ezra Pound’s phrase). As a modern dance company, they’re remaining true to the Modernist project: innovating, even in response to the wild, forced changes of the pandemic. Indeed, this art form lives. And it has a past, present, as well as a future in Kalamazoo.

Tweet
Published in Theatre
More in this category: « Review: 'Murder for Two: Holiday Edition' Rings in the Season With Pitch-Perfect Performances Jewish Theatre GR: Five Plays For Eight Nights »
Login to post comments
back to top