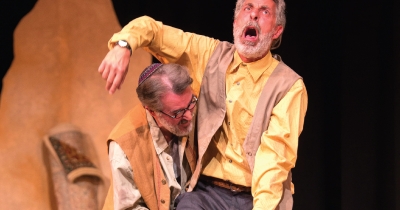 To tire of talking lobsters is to tire of life. Thankfully, Jewish Theatre Grand Rapids retains its youthful energy; its upcoming production Chanukah Shorts (running December 11th – December 19th) will feature among its offerings a lobster who hopes to convert to the faith, and the rabbi he approaches.

That occurs in Matthew Freeman’s Rabbi Hersh and the Talking Lobster, one of the five plays which constitute Chanukah Shorts. Paul Arnold, board chair of JTGR, said, “It’s just hilarious. But it’s poignant, too.” Rabbi Hersh is a lonely man, and glad for the company. But can he trust the creature’s motives?

Each segment will be between 10 to 20 minutes, which might be the perfect length: enough time to make an impression without wearing out your welcome. The first is Sheri Wilner’s The Miracle of Chanukah. In it, a family takes turns sharing miracles that occurred to them that year. Most aren’t true miracles, but reasons for gratitude (an accepted proposal; a survived accident). But a new participant shares what she claims is a genuine miracle, forcing the others to question the boundaries of their faith, and the place of miracles in the modern world.

In Wilner’s The First Night of Chanukah, a man named David Schwartz is stranded in while traveling. “You know,” he says, “I bet I am the first Jew who’s ever been to Devil’s Lake, North Dakota. Or probably the first Jew anywhere in North Dakota” (untrue; as many as nine are rumored to have visited the state). A mysterious stranger approaches and asks for assistance in lighting a menorah. David’s lighter is empty, but it’s a special night…

The wonderfully titled Home For The Chaliday, written by Sharyn Rothstein, finds a young family returning home during Chanukah only to find that their home has been broken into. A note left by the intruder reads, “Happy Chanukah.” A positive message, or an anti-Semitic jab? Hasn’t their neighbor always seemed to have certain, well, tendencies?

Rabbit Hersh and the Talking Lobster follows, but you know about that one. Samara Siskind’s Bar Mitzvah Boy closes the show. It tells of Samuel Rosenbaum who has endured the rigors of study required to reach manhood, and who is now faced with an even more formidable challenge: girls.

Each of the plays is steeped in humor, imagination, and the richness of Jewish tradition. “We do Jewish themes that are universal in appeal,” Arnold said. While Grand Rapids has a vibrant, wonderful Jewish community – visit Temple Emanuel, if you haven’t yet – it is not the largest of all communities, and not all its members go to plays.

“So, we put on shows that all people would like.”

Chanukah is specific to Judaism, but humor isn’t; nor are themes of struggle, or spirituality in the modern world, or family. Non-Jewish attendees will recognize themselves and the people they love on stage, even as they learn about the faith.

Jewish Theatre Grand Rapids hasn’t performed inside, on a stage, in twenty 20. Chanukah Shorts represents a homecoming. The virtual shows staged during the pandemic were not a full substitute; being together in a room matters.

It will be a success if JTGR can bring its core audience together again. It will be even better if it can expand that audience. Grand Rapids is stuffed to bursting with theater, much of it good; it’s a blessing, but it can also mean that some shows, terrific as they are, can be overlooked. Anyone who loves to laugh, and to be moved, should buy a ticket, take a seat, and prepare to be delighted.

Tweet
Published in Theatre
More in this category: « Review: Wellspring Shows the Power of Change with 'Unbound' Goodbye Season Tickets, Hello Affordability & Flexibility »
Login to post comments
back to top