Review: ‘Shakespeare In Love’ is a Charming Delight 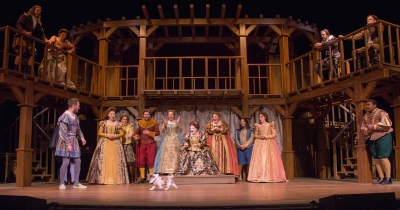 “Shall I compare thee to a… something?” We don’t usually think of the immortal bard as wracked with writer’s block. And we don’t think of him as young and handsome, either; in the famous Chandos portrait, he’s all receding hairline and sad eyes: a middle-aged icon. But at the beginning of Shakespeare In Love (onstage at Grand Rapids Civic Theatre through February 13th), he’s floundering.

His friend Christopher Marlowe, who has inspiration to spare, helps, tossing him a few lines and encouraging the production of his own. Marlowe, the author of Doctor Faustus, is played by Nate Reynolds with a louche, indulgent chumminess. Here, he’s presented as the far more popular and successful playwright. These days, his admirers are relatively thin on the ground, while Shakespeare is used to sell mugs, t-shirts, and Polish condoms.

Young Shakespeare (played by Kevin McCasland), finds inspiration soon enough. He’ll write a comedy: Romeo and Ethel, The Pirate’s Daughter. In Elizabethan England, men played all roles; in a neat twist, Romeo is played here by a young woman named Viola (Seraphina Zorn), disguised as a man named Thomas Kent. And, as is not uncommon in Shakespeare’s plays, she falls in love while in disguise.

I won’t spoil where it goes from there (although those who remember the 1999 film on which it’s based already know). But, knowing that Shakespeare was married at the start of the play, and knowing, too, that English law precluded divorce, you know, at least, where it can’t go.

Civic’s production is as solid as the wood that constitutes its well-designed set. No actor or actress flubs a line, and even the least substantial roles thrum with energy and, often, humor.

It’s a funny play, not in the “I understand this reference!” sense, but actually funny. From the beautiful, plentiful costumes to the gorgeous music that periodically graces the stage (look, and listen, for Hannah DeBoer in particular), the professionalism and passion of the cast, crew and volunteers are on fine display.

The writing is irresistible for English majors, who will easily pick out common Shakespearean themes and references to other plays; if you’ve seen Titus Andronicus, you’ll appreciate this play more than you would otherwise. But even those new to Shakespeare will find humor, drama and romance.

It’s in that last category, romance, that the play feels thinnest. This is the story of a married man who pursues and beds a young woman who adores his writing: we’ve heard that tale before. And while McCasland and Zorn are talented actors, I was never able to quite make out any sparks leaping between them. Although, it may be because the play is so stuffed with incidents (a swordfight; a wedding) and characters (Queen Elizabeth; a dog; a ghost) that the romance gets short shrift.

Does it matter? Not much. In its bold, sometimes bonkers recreation of a long-lost world, Shakespeare In Love aims to charm and amuse, and it certainly hits its target.

Tweet
Published in Theatre
More in this category: « Review: Enter a Hallmark Movie with Barn Theatre's Christmas Cabaret Review: 'Lifespan of a Fact' is a Compelling Discussion of Truth »
Login to post comments
back to top