Review: 'Lifespan of a Fact' is a Compelling Discussion of Truth 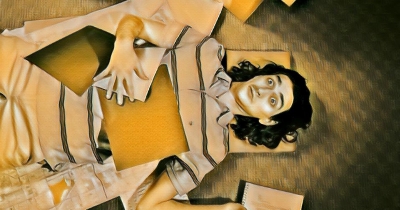 "Lifespan of a Fact" at Farmers Alley Theatre. Photo by Becky Klose.

During my brief stint as a fact checker for Mother Jones Magazine, I was told by an editor that if I didn’t wake up at night sick with panic over inaccuracies I may have overlooked, then I wasn’t doing my job.

The fresh-from-Harvard magazine intern Jim Fingal, a character in the excellent 90-minute darkly comic topical play “Lifespan of a Fact” that opened this weekend at Farmers Alley Theatre in Kalamazoo, is in such a panic over his first fact-checking assignment—for which he’s given less than five days—he compiles a spreadsheet of potential errors more than 100 pages long and flies to Las Vegas to verify the color of a pavilion’s bricks, the exact number of strip clubs in the city, the possibility of a traffic jam on a particular road, and the number of seconds it took a teenager to fall to his death, among other details. In fact, he shows up on author John D’Agata’s doorstep to negotiate.

Definitely an accurate depiction of the feeling of truth based on what I recall from my 26-year-old budding journalist’s experience. But perhaps also one of several exaggerations for the benefit of the story.

Adapted by Jeremy Kareken, David Murrell, and Gordon Farrell from the 2012 nonfiction book written by the aforementioned central characters about their ordeal, the 2018 play has a meta quality and heightened stakes thanks to deliberate compression of time. It actually took seven years for the writer and fact-checker to hash out the long form essay’s details rather than a few hours. But the witty, faced-paced drama gets at the heart of the conflict between truth and accuracy, poetic license and journalistic integrity—without resolving it and with a surprisingly gracious sense of humor.

Director D. Terry Williams makes these deeply intellectual if not wholly philosophical issues delightfully embodied with an excellent cast and interesting blocking that miraculously turn conversations about ideas between two and three people into real action.

Myles Schwartz’s naively eager Jim brings high energy while being, at turns, deadly serious and hilarious in his obsessive pursuit of accuracy. Paul Stroili offers Norman Mailer-level arrogance as John D’Agata, a writer known for taking liberties with the truth, and is wonderfully complex and utterly convincing in his arguments for beauty and rhythm first while also revealing a subtle vulnerability and nuance. When he says, “I’m not interested in accuracy. I’m interested in truth,” you want to understand even as you feel compelled to call BS on him. Together Schwartz and Stroili bring out the best in each other’s potential with these characters.

Though it’s the presence of Laurie Carter Rose’s terrific portrayal of the smooth, cool, and tough editor Emily Penrose that interrupts what could otherwise be a pissing contest between an older and a younger man, both strivers. She brings complicated ethics as representative of both the story’s subjects and a waning publishing industry obsessed with the bottom line as well as compassion for the dueling men and their points of view. Plus the fact that she’s a powerful woman who’s ultimately in charge but without calling attention to herself makes for quietly powerful gender dynamics.

Sets by Dan Guyette and lighting from Kristen Chesak work beautifully together to delineate time and space, both crucial to the clarity and pacing of the story.

And ultimately, the success and the purpose of story is what this play is about—and what makes its topicality perpetually relevant. Though the prevalence of disinformation and peculiar interpretations that have brought us to the absurdity of “alternative facts” and “fake news” and the speed at which they’re disseminated have lead us to mistrust the media if not all information, “nothing is more important than story,” Emily tells Jim. “It’s how we organize our lives in a way that gives our lives meaning.”

So, then: are facts and accuracy paramount? Or is truth and beauty? Is it a false dichotomy?

“Lifespan of a Fact” doesn’t provide the answers, but it does provide worthwhile and entertaining fodder through which to ponder the important questions.

Tweet
Published in Theatre
More in this category: « Review: ‘Shakespeare In Love’ is a Charming Delight Review: 'Waitress' Showcases Incredible Musical Talent »
Login to post comments
back to top