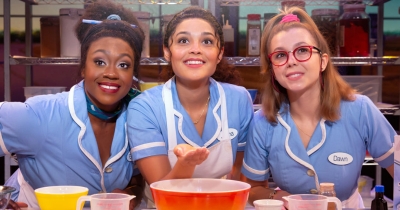 I have never heard a live performance of pop composer Sara Bareilles’s “She Used to Be Mine” without being moved to tears.

This climactic ballad from the Broadway hit “Waitress,” currently at Miller Auditorium at Western Michigan University in Kalamazoo having resumed its tour after a two-year forced COVID pause, is a woman’s song to herself, looking inward as if from the outside, And its melody and lyrics ring so true, they tug at the heart strings of anyone who has experienced a sense of inner turmoil, complexity, regret—and deeply deserves compassion.

In other words, to be human is to be moved by this gorgeous work of art.

This is “Waitress” at its best. The 2016 Broadway hit based on the 2007 film written by Adrienne Shelly with book by Jessie Nelson and music and lyrics by Sara Bareilles was—and is—striking primarily for its originality in subject matter.

A woman-centered show that focuses on small-town American working-class life, it tells the story of Jenna, a waitress with an abusive husband who also finds herself with an unwanted pregnancy. She escapes her wretched reality dreaming up and creating unusual pies (inspired by the skills her also mother passed down to her) as well as having an affair with her gynecologist. And though unlikely, it’s both a romance and a comedy.

Despite flat, cartoonish characters—as written and performed—there’s so much here to appreciate and admire, largely in the storytelling and in the singing in this touring production, directed by Susanna Wolk, based on original direction by Diane Paulus.

Part of Waitress’s terrific appeal is that it’s faithful to the 2007 film and unflinchingly looks the very real difficulties of women’s lives square in the face, making the most of the unavoidable hilarities and vulgarities therein—without diminishing either the highs or the lows. The narrative arc follows Jenna primarily, and her emotional change comes alive through song more so than plot points, and Jisel Soleil Ayon sings the music beautifully and with powerful feeling. She’ll move anyone to tears at least twice in each show with her gorgeous singing.

Other than the songs, however, her character falls flat as if she’s overmedicated and feels nothing—despite her intolerable circumstances; her lines spoken as if there is gravel in the back of her mouth (ostensibly to misguidedly create an ambiguous Southern drawl) and therefore hard to understand; and there’s no hint of any palpable connection between her and pretty much everyone else on stage—despite everyone else’s emotional and physical acrobatics.

But those physical and emotional acrobatics that swirl around her get big laughs. David Socolar jumps over the examination table, kicks shut a door, nervously twirls and twitters and flips his way around Jenna in what appears to be a sugar- if not cocaine-induced fit. It’s funny and weird and then surprising that things turn sexual (at one point he literally eats a pie off her crotch).

Real chemistry finally arrives in their stunning duet “A Soft Place to Land” when tenderness and a love deeper than romance takes center change, providing a turn in the narrative that finally shows them feeling something true. Their voices together are a dream.

Brian Lundy provides a parallel comic foil in Ogie, who’s like a balletic praying mantis with an inhaler. His silly, athletic dancing (often on tables) is among the most exciting of all the choreography (recreated by Abbey O’Brien based on Lorin Latarro’s original choreography), and he woos Dawn (Gabriella Marzetta), a fellow waitress at the diner, by matching her quirkiness and just being a pest.

They, along with the excellent ensemble who create percussion with their hands (in “Bad Idea”) and wooden spoons (in “I Love You Like a Table”) to complement the terrific five-piece band on stage, provide the background to support the profound changes taking place for Jenna. In this, they make marvelous music and offer levity by inspiring easy laughter.

But the most notable storytelling happens through moments of reverie for Jenna, signified by the repetition of “Sugar, Butter, Flour” that instigates dramatic dimming of lights (designed by Ken Billington) and a spotlight on Jenna as she dreams up a new pie inspired by whatever slight she’s just endured (Betrayed By My Eggs pie is but one example). At times she is shadowed in these moments by groups of carefully choreographed, ghost-like ensemble members as if to signify the legions of women—ancestors or otherwise—who have also survived if not thrived through these particular heartbreaks and sufferings. She is not alone.

And through it all she changes. But not perhaps in the ways we might think. Just like in our own lives.

Ultimately, this is a powerful love story. And despite its shortcomings, “Waitress” is uniquely moving.

Tweet
Published in Theatre
More in this category: « Review: 'Lifespan of a Fact' is a Compelling Discussion of Truth Rebel Girls: 'The Revolutionists' at Farmers Alley Theatre »
Login to post comments
back to top