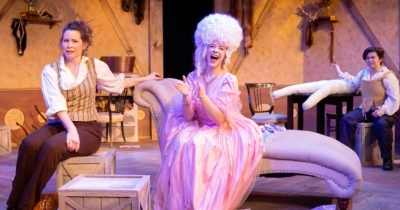 What is the role of art and artists amid times of violent political upheaval? And how might women play a part in writing history, thus changing the ways it’s told, and in turn, how they are remembered?

These are but two of the heady questions that drive the bold and surprisingly delightful comedy, The Revolutionists, by Lauren Gunderson.

To name the playwright this early in the review feels particularly important, for even though the play is set during the French Revolution and it makes use of four different characters (one fictional, the other three based on historical figures) to explore the aforementioned questions, it’s a play within a play—and has a playwright struggling to write a play (in fact, the very play that’s unfolding before us, perhaps) at its center.

And please don’t refer to her as a “woman playwright.” Playwright will do.

Though the inevitable self consciousness of this meta-play can grow a bit tiresome in this 90-minute show without intermission, it’s ultimately smart, funny, and brilliantly produced at Farmers Alley Theatre.

Directed with aplomb by Dee Dee Batteast with an excellent cast and terrific technical elements, this quick-paced historical fiction places a guillotine (quite literally) at its center, a reminder of the stakes at play. Beheading is the end game, and these women know it’s their fate, so their motivation—and therefore the drama—is heightened.

Olympe De Gouges (Lisa Abbott) is grappling with deciding what to write when her impassioned friend Marianne Angelle (Arizsia Staton), a Caribbean freedom fighter, proposes she eschew fictional plays for political pamphlets and make a real mark on the tumultuous times. Meanwhile, a very intense Charlotte Corday (Devon Hayakawa) is intent on assassinating Jacobin journalist Jean-Paul Marat, and a very bubbly and gorgeously dressed, of course, Marie Antoinette (Megan Tiller) knows she’s going to die and wants a hand in how she’ll be remembered.

“Find the heart, not the art” and “write what you want” rather than follow the tired writing advice to “write what you know,” Angelle, the only purely fictional character of the lot, urges De Gouges, who toys with the idea of writing a musical, maybe with puppets—though how ridiculous and ill-fated would a musical about the French Revolution be, she muses, to great laughter from the contemporary audience well aware of Les Mis’s influence on theater history.

Self-effacing jabs and quips about theater, art, and storytelling abound, and using amusingly anachronistic contemporary language while also at times spontaneously rhyming and speaking in couplets, this extraordinary ensemble builds touching relationships and poignant moments while also making us think and laugh and feel the injustices—then and now. It’s quite a feat.

They pull it off with terrific pacing and comedic timing as well as tremendous technical choices under technical direction from Mike Borzkowski. The actors rearrange the set pieces to reset the shifting scenes over and over again, keeping the action moving and making the most of Samantha Snow’s clever set. Jason Frink’s lights also help effectively create those different scenes as well as moods, which also work with Austin Donovan’s sound design to make the guillotine come to life. Savannah Draper’s props are as crucial to the storytelling as Katherine Wagner’s costumes and Steve Hodges’s wigs are to building characters. Together, they make this compelling tale beautiful.

And it more than achieves its two playwrights’ aim: in writing and rewriting their story as it’s happening—like history itself—they, in effect, create a play that, like life, doesn’t neatly end.

“A story is more alive than a fact,” Olympe says as she approaches the guillotine. “A story lives.” And armed with this thought-provoking, living story based loosely on facts, the audience is well equipped to heed her call to avenge her death. For in bearing witness to her story as she’s told it, we’re immortalizing not just her, but also reclaiming a little bit of every forgotten woman’s experience.

Tweet
Published in Theatre
More in this category: « Rebel Girls: 'The Revolutionists' at Farmers Alley Theatre Review: GR Ballet Closes Out 50th Season with Multigenerational Magic »
Login to post comments
back to top