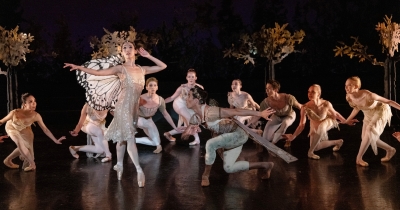 The final offering in Grand Rapids Ballet’s 50th anniversary season has been a long time coming.

Rehearsals for George Balanchine’s celebrated classic “Serenade” and Christopher Stowell’s “A Midsummer Night’s Dream” began in 2019, but their planned performances were thwarted by the pandemic.

After an exquisite opening Friday night, it’s clear the company, after 50 years, is firmly rooted in classical ballet with an extraordinarily skilled community of dancers who are masters of technique as well as wonderfully expressive performers who possess terrific range and depth.

And it was worth the wait to see these works of art.

The performance opens with Balanchine’s 1934 “Serenade,” a dreamlike, joyful, exuberant celebration of classical ballet as Balanchine interpreted and transformed it, set to Tchaikovsky’s Serenade for Strings. He created the dance initially as a class exercise, working with whatever dancers showed up, allowing it to shift and change based on who was there; and it reflects the fact that there’s no discernible story though it valorizes women in an impassioned and romantic display.

Then there are the brilliant lifts and tiny beurres of the second section full of gorgeous tableaus and formations in which the dancers really show off their musicality: and when the women literally let their hair down and three are partnered by one man, then four men partner eight women, and their expressivity is sublime.

It’s a piece that begins with the powerful simplicity of 17 women standing with feet together in parallel and then turn out en masse to first position, feet in a wide V. It’s the most elemental first movement toward ballet, and as a work of art, it’s a brilliant way to mark the 50th year of professional ballet in Grand Rapids.

Christopher Stowell’s “Midsummer Night’s Dream” is the second ballet in this performance, and it gives the company a chance to make use of all that technique, history, and expressivity for the purpose of playful enchantment.

Premiering at Oregon Ballet Theatre in 2007, this delightful, lush adaptation of Shakespeare’s comedy set to Mendelssohn makes use of the entire Grand Rapids Ballet company, as well as young students of the Grand Rapids Ballet school, a wonderful nod to the importance of the entire organization, especially the generations of dancers to come who will carry on the tradition for the next 50 years.

Complete with props, set pieces, scene changes and marvelous costumes (courtesy of Oregon Ballet Theater), this clever, abbreviated storybook ballet is highly theatrical and gives the dancers an opportunity to show how very talented they are as actors as well as dancers.

And though misdeeds, misunderstanding, and impish trickery abound, all’s well that ends well in this romantic, mystical, and ultimately joyful tale.

It’s a celebration, indeed, of 50 years in the making as well as the gift that Grand Rapids Ballet is to the community. Artistic Director James Sofranko acknowledged the importance of the arts to community in his curtain speech opening night—creating a thoughtful moment of silence after saying the name of Patrick Lyoya on the day of his funeral, bringing the darkness of this moment of injustice to light.

Then as if an incantation, Sofranko invited the audience to enjoy the momentary escape the arts offers and dwell in the solace and peace of this performance.

Indeed, we must come together as a community, in darkness and in light; and this final program of Grand Rapids Ballet’s 50th season provides a magnificent opportunity to bask in the company’s light.

Tweet
Published in Theatre
More in this category: « Review: 'Revolutionists' Tells the Compelling Tale of Forgotten Women Review: 'Lady Day at Emerson's Bar & Grill' is an Unparalleled Tribute to Billie Holiday »
Login to post comments
back to top