Review: You Can't Not Have Fun with 'Kinky Boots' 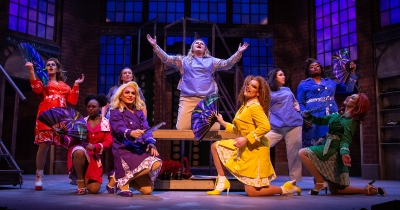 “When the going gets tough,” drag icon RuPaul once said, “the tough reinvent.” For Price & Son, a four-generation shoemaking business, times have gotten tough; wealthy people ignore their wares in favor of designer shoe that costs three months’ worth of London rent, while the poor can only afford cheap shoes that need replacing once a season. A reinvention is needed. Will one be achieved?

In Kinky Boots, on stage at Grand Rapids Civic Theatre through May 22nd, the answer is never really in doubt: this is a comedy, after all. And it’s a bold, brash, celebratory comedy, as sparking as the red boots of its title.

The story begins with Charlie Price. Played by Jake Doctor (a younger, more handsome Ricky Gervais), he’s a man torn between desires: the desire of his upwardly mobile fiancée to secure a rich life in London, and his own desire to save the ailing business willed to him by his late father.

His life changes when he encounters Lola, a drag queen (played by Christopher Curry). We get to see Lola in her element in the song “The Land of Lola” (“Just let your eyes explore/my cinematic flair/from boots to derriere”). Onstage, flanked by his angels – fellow drag queens – Lola is all biceps and lipstick: a star.

Meanwhile, the business continues to unravel. Price finds himself having to lay off workers. One of them (Lauren, played by Rebekah Levine), suggests that they need to find a niche. And inspiration hits. Soon, Lola has been employed as a designer, and the titular boots are on their way to becoming reality.

The book, by Harvey Fierstein, finds some tension in the circumstances. Would a rural factory embrace making boots for drag queens? Not easily, especially 10 years ago, when the show debuted. So there’s tension, much of it emanating from Don (a wonderfully brooding Stephen Huseby), but none of it spills over into darker territory.

The best of the songs might be “Sex Is In The Heel,” a 1980s-tinged burner worthy of its composer (Cyndi Lauper). But “Everybody Say Yeah!,” the first-act closer, is up there, too; it’s rousing enough that I was surprised people weren’t dancing in the aisles—especially considering how rowdy the audience otherwise was. And Lola’s “Hold Me In Your Heart,” sung after her lowest moment, is lovely, powerful, and still; for a few minutes, we seem to be peering into her soul.

The show is director Bill Anderson’s first main production at Civic. Full disclosure: I know and like Bill. But that wouldn’t mean that I’d like the show. At first, I wasn’t sure I would; it moved awfully quickly, at first, and a few lines were stumbled over, maybe due to opening-night jitters.

But as the play pulled further from the station, it gained steam. Curry won me over, both as his drag persona, Lola, and offstage self, Simon. He proved capable of being vulnerable, seductive, funny, tough, and uncompromising. Doctor brought charm and, occasionally, rock-and-roll swagger to his part as Charlie Price. And Levine, as besotted Lauren, was fantastic, both a great singer and a great physical comedienne. Put her in everything.

And the angels! Try not to have fun when they’re onstage. It can’t be done. They bring enough energy to power the block, and enough athleticism to burn off a dozen deep dish pizzas. If I could kick that high, I would never stop doing it.

The beats of the story are sometimes predictable; Kinky Boots is not setting out to surprise you. What it’s setting out to do is entertain you, and it succeeds. For all the welcome diversity onstage, and all the quiet sermonizing Fierstein can’t quite bring himself to resist, this show is a party. Glam yourself up and get there.

Tweet
Published in Theatre
More in this category: « Review: 'Lady Day at Emerson's Bar & Grill' is an Unparalleled Tribute to Billie Holiday Review: Prepare to be Moved by ‘Dear Evan Hansen’ »
Login to post comments
back to top