Review: Prepare to be Moved by ‘Dear Evan Hansen’ 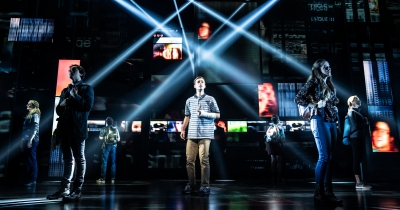 Evan Hansen is a mess. He’s awkward, the kind of young man who’s always looking at the ground or pulling at his shirtsleeves. He’s more or less friendless. And when he sees beautiful Zoe (Alaina Anderson), he’s tempted to talk to her, but soon his palms are sweating, and worrying about them sweating makes them even sweatier; besides, what could he possibly say?

Evan Hansen might not sound like the traditional lead of a musical, but he was certainly embraced as one; Dear Evan Hansen won six Tony awards, including Best Musical. The touring production is currently onstage at DeVos Performance Hall, via Broadway Grand Rapids, running through May 8th.

“Anybody Have A Map?”, the opening number, presents Evan to us through the eyes of Heidi, his mother (Coleen Sexton). A single mother (her husband, Evan’s father, fled to the arms of a cocktail waitress), she’s struggling to keep things together. She works as a nurse, takes paralegal classes at night, and uses what spare time she has in trying to draw out her awkward, inward son.

Singing, too, is Cynthia (Kelsey Venter). Her life might be outwardly more successful—her husband’s income allows her to not have to work—but she’s just as lost. Her son, Connor, is angry, depressed, and an addict, and nothing she does seems to alter those fundamental facts.

At school, Evan runs into Connor. A chance encounter will lead to Connor’s signing Evan’s otherwise blank cast. That evening, Connor will kill himself, setting in action a series of misunderstandings and well-meant deceptions that will catapult Evan into online fame, into broad acceptance, and into romance. Hovering over these events is an unasked question: what happens when you do the wrong things for the right reasons?

The story, and the themes it explores, are both of the moment and timeless. The staging expertly recreates the experience of scrolling through social media, but it also establishes the dinner table intimacy central to so many of our lives. By pivoting from a viral video to a tentative kiss in a suburban home, the show captures what it feels like to live now.

And it does so, of course, through music. “Waving Through A Window,” an early highlight, allows Evan to express what it feels like to be anxious person desperate to connect but unable to do so. “Can anybody see? Is anybody waving back at me?” Here, as elsewhere, actor Sam Primack is remarkable. It was gratifying, but unsurprising, to learn that he will play the role on Broadway.

In a relatively small cast, everyone needs to shine. Everyone did. In “Requiem,” Connor’s mother, father, and sister sing about the loss. The song belongs to Zoe most of all; it’s about her anger at her brother, and how she refuses to mourn, or thinks that she does. Anderson brought an aching fury to the role—a refusal to show the wounds we knew were there.

In “So Big/So Small,” Heidi sings to her son, reminding Evan of the day his father left. It’s a bravura performance, complex and powerful; I was amazed that Venter could convey such hurt while still singing so beautifully. Her craft was so strong as to be invisible; watching, I could only see the character, not the actress.

As Evan’s lies become threatened with exposure, real tension emerges. I don’t know that the ending is entirely earned; the show glosses over whether those lies became known online, and, if they did, the trauma Evan must have experienced in having gone from beloved to despised.

Still, Dear Evan Hansen is undoubtedly a moving and remarkable show. More than once, I found myself crying, moved by the music, and the writing, and the sense that I had been given a chance to see into the messiness, triumphs, and pains of real people.

Tweet
Published in Theatre
More in this category: « Review: You Can't Not Have Fun with 'Kinky Boots' Review: Circle Theatre's 'Rent' is Full of Passion and Talent »
Login to post comments
back to top