Review: Circle Theatre's 'Rent' is Full of Passion and Talent 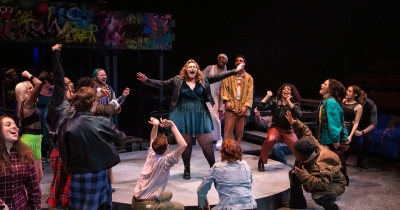 Two hundred years after the premiere of Puccini’s La Bohéme, Rent debuted. A loose adaptation of the former, Rent centered its action in the East Village neighborhood of Alphabet City. It’s startling to realize that the musical, with its Doc Marten-clad women and answering machine messages, has itself become a period piece; these days, no one can afford to starve in Manhattan.

The show is onstage at Grand Rapids Circle Theatre through May 21.

There’s a narrator, Mark (played by Li Bulkowski), a would-be documentarian, but in truth the show is an ensemble. The characters represented what was in 1996 an unusual diversity—a diversity of ethnicity, sexuality, and socioeconomic status, and, crucially, health: several characters were HIV-positive.

Roger (Lucas Story), Mark’s roommate, is an ex-junkie yearning to write a great song but unable to tune his guitar. Into his apartment and his life slinks Mimi (Iriana Cotto), a feline exotic dancer and an addict herself. Her song “Out Tonight” (“We don’t need any money/I always get in for free”) is anthemic and raw, a soundtrack to hunting down trouble. The two will circle each other for the rest of the show.

If Tom Collins (Darius Colquitt) seems aptly named – he loves a celebration – his lover, Angel (Khari Neal), is even more so. Angel is selfless, less a person than a sentimental ideal, which might reflect creator Jonathan Larson’s relative discomfort with drag queens; when you’re uncomfortable, it’s harder to write real people.

Most vivid among the characters is Maureen (Alexus Voss). We hear about her before we ever see her. She’s a big deal, we intuit. Her revelation is no disappointment: Clad in moon-printed pants and a bovine top, Maureen is beautiful, charismatic, and slightly bonkers; not everyone can pull off drinking milk straight from the udders of an imaginary cow, but she does so with aplomb.

The story is unfocused, in a way that feels true to the lives of unmarried twenty-somethings, those of us who found meaning through our friendships, complicated as they could sometimes be. Many who saw Rent in their youth have a deep attachment to it. I, not having seen it until my forties, found myself alternately charmed and put off; Mark and Roger veered into histrionic territory at times, and there’s little to love in watching white guys, unemployed by choice, stiff their black landlord.

Still, there’s often real power to the music. Larson (who died the day of the off-Broadway premiere) clearly had talent to burn. The songs incorporate everything from hard rock to, somehow, the tango. The lyrics are sometimes moving, sometimes not. It’s possible to imagine that, had Larson lived, he would have more tightly edited the show, making sure each moment was earned, and that each emotion connected. He didn’t have time.

Circle’s production is fairly swollen with talent. I’ve mentioned Voss, who inhabits Maureen with seeming effortlessness. Darius Colquitt is a different kind of performer; you can see the effort at times, but that isn’t a bad thing; James Brown sweated, too. Colquitt has a powerful voice. Hearing it unleashed was one of the high points of the show.

Debra Perry led an ensemble of musicians, all of them on-point. At times, though, the instrumentation was loud enough that the singers seemed to fight against it. This became less of a problem in the second act, when the show fully found its feet.

Rent is a messy show, and a brave one. If its bravery is less striking than it was in 1996, that’s because, in many ways, it cleared a path; its lasting legacy might not be the Tony Awards, or Pulitzer Prize, or the movie it fathered, but the fact that a young Lin-Manuel Miranda sat in the audience, learning what he would someday do.

Tweet
Published in Theatre
More in this category: « Review: Prepare to be Moved by ‘Dear Evan Hansen’ Review: 'Dirt, Ash, Dead Tree' is an Unforgettable Testament to the Power of Collaborative Theatre »
Login to post comments
back to top