Review: 'Dirt, Ash, Dead Tree' is an Unforgettable Testament to the Power of Collaborative Theatre 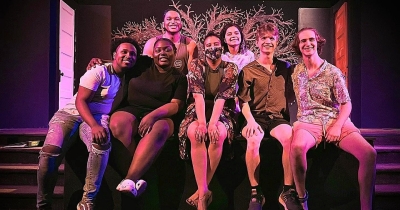 It’s extraordinary that live theatre has survived. Because of the pandemic, yes, and also thanks to technological advances that have created seemingly infinite entertainment options at our fingertips at any given moment. That we still opt to congregate together, though masked, after having proven our vaccination status, for the purpose of witnessing living, breathing humans right in front of us tell scripted stories using little more than their physical instruments and honed craft, is a marvel.

And what’s downright miraculous, is that in Southwest Michigan, we have the option to see a world premiere of an edgy and wildly creative play that tackles real issues artfully.

A beautiful collaboration between FaceOff Theatre and Queer Theatre Kalamazoo, Dirt, Ash, Dead Tree by Jarrett McCreary, and directed by Yasir Muhammad, is that very worthwhile show; and there likely isn’t anywhere else on this side of the state that you might see anything like it.

A cast of four talented actors tell the story of Dayo (Greg Miller), a young, gay black man who’s just this side of a suicide attempt, trying to make meaning of a life ravaged by the horrific traumas he’s both internalized and inflicted on himself—with the help of two truth-talking mystical creatures, The Owl (Ryan Tiara Jordan) and The Lion (Jessica Krolik), who challenge and correct his memories and internal monologue, much of which revolves around his first sexual experiences and beautifully awkward, mostly unrequited love with Micah (Adam Nyhiff).

The brilliant play is shot through with magical realism rich with symbolism and parallel structure; crucial scenes repeat with slight changes, a mirror of how memory works. We can’t help but fall in love with this young wanderer searching at once for home as well as to be found—and to feel terrific compassion for him in his quest.

Director Yasir Muhammad’s vision is powerfully realized with universally strong performances in this low-budget production that righteously focuses on telling a crucial story without overly complicated technical elements. Muhammad himself is responsible for simple street clothes costumes and functional sets to create quick scene changes; and together with Ynika Yuang, he creates sound design that poetically communicates the complex narrative. And even in the converted church of Dormouse Theatre with windows blacked-out during a matinee performance, Zaynee Hobdy’s lights delineate shifts in time and consciousness.

Leah Todd’s chalk mural of a tree that remains upstage center throughout the show is a symbol of stunted growth, change, and impermanence in this unique and important story that defies simple summary.

In one crucial scene Dayo describes his black skin as a symbol that he did something to deserve his suffering, like every black boy is always to blame for his own death. It’s a painful realization of many that leads this play to beg the question: what do we call it when “mental Illness” is the sanest response to extreme suffering and overwhelm inflicted by your culture? When the most courageous act is to burn down the house and sit down inside of it? When death feels like a dream and the only possible way to start over?

That FaceOff Theatre and Queer Theater Kalamazoo have created such an artful and thoughtfully complex premiere production that invites us to go this deep is a testament to the power of collaborative theatre in this community. And with all tickets pay-what-you-can, they make such an extraordinary experience accessible to anyone with a vaccination card who’s willing to wear a mask.

Tweet
Published in Theatre
More in this category: « Review: Circle Theatre's 'Rent' is Full of Passion and Talent Review: 'Biloxi Blues' is Hilarious, Deep, and Timeless »
Login to post comments
back to top