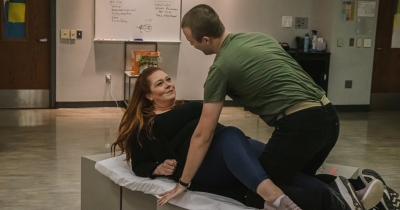 As a boy, Neil Simon would sometimes cover his ears with a pillow, hoping to drown out the sounds of his parents fighting. When the fights got bad enough, his father would take off; he’d be gone for months at a time—not an easy thing for a family to deal with, especially during the Depression.

Simon made it through childhood, sustained by movies and graduating high school at 16. Joining the Army Air Force Reserve got him out of town. In time, he earned the rank of corporal. Almost forty years later, he would lean on his time in the service when writing Biloxi Blues, his twenty-first play.

Jewish Theatre Grand Rapids’ production of Biloxi Blues, which runs through May 21st, provides the opportunity of weighing whether the show’s still relevant. It’s not an idle question: This is a staging of a show from nearly 40 years ago, set another 40 years or so before its premiere. Has it aged like a fine wine, or like a print ad for “healthy” cigarettes (“More Doctors Smoke Camels Than Any Other Cigarette?”).

The play opens with men riding a train destined for a basic training station in Biloxi, Mississippi. Most are trying to sleep, but the odors, as well as the occasional nocturnal singing, make it more or less impossible. Slightly removed from the action is Eugene (Sam Verburg), a would-be writer and a stand-in for Simon himself.

Soon the men arrive, and are greeted by Sgt. Toomey (Shane German), a man determined to break the new recruits in order to give them the best chance of living. He brings a wry, performative humor to his duties, and a certain weariness, as if he doesn’t trust anyone else to be smart enough to get the jokes. German brings just the right ratio of sincerity to wink; the audience loved him.

The outlines of the play soon come into view: a power struggle between Toomey and Arnold (Alex Weiss), a fiercely moral, intellectual young man. Like Eugene, Arnold is Jewish—one more thing to dislike him for, from the perspective of some of the other recruits. Weiss plays him as all sharp angles and assured pronouncements. Gene Wolfe once wrote of someone else that “he was proud, like all lonely men. Lonely men must be proud or die.”

An early thread is Eugene’s virginity, which he’d like to shred, assuming he can work up the nerve. Into his paying arms comes Rowena (Noddea Skidmore), a part-time demimondaine (only on the weekends). The scene with Rowena rivals Toomey’s early scenes for pure humor. Skidmore is clearly a professional. Professional actress, I mean.

Later, Eugene will meet Daisy (Kiera Zittel), a Catholic schoolgirl who captures his heart. Daisy’s pretty, and their blossoming romance is sweet, but it feels out of place, as if Simon, having glanced at a list of theatrical conventions, decided to cross “first love” off it.

The real story is back at the base. When things come to a head, they do so in a tense, deeply satisfying fashion. For all that the show is funny – and it is; it’s often hilarious – there are deeper currents running beneath it.

Jewish Theatre’s production, which was professional, well-directed, and well-rehearsed, easily answered the question of relevance. Real art is timeless, or close enough to it, and there will always be an audience for stories of innocence coming face-to-face with experience.

Tweet
Published in Theatre
More in this category: « Review: 'Dirt, Ash, Dead Tree' is an Unforgettable Testament to the Power of Collaborative Theatre Review: The Beauty of Life Shines in 'Every Brilliant Thing' »
Login to post comments
back to top