Playing My Small Part: Onstage with the Opera 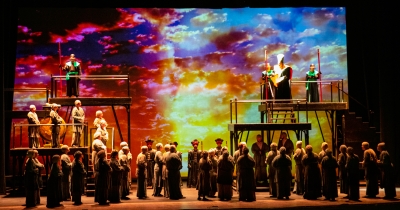 I am in China, carrying a severed head.

I’m walking toward the ministers of state, who moments before had complained of their responsibilities, pining instead for simple lives far from the palace. The head is snatched away; the ministers use it to play catch.

Six years ago, I started writing about music, theater and art. I had the sense that a lot was going on in Grand Rapids (I was right about that) and that I could write about it in a compelling way (the jury’s still out). For a while, I hugged the shore, writing mostly about what I knew best, and avoiding deeper waters.

Still, distant islands called. Opera was one of them. I knew less about it than anyone you know, having gleaned the entirety of my knowledge from What’s Opera, Doc?, the classic Bugs Bunny short. Determined to learn more, I took in a show — or, I took in a portion of a show, after which I fled with a friend in search of beer. To be fair, we ended up at Founders, so the beer was excellent.

But I had the nagging sense that I was missing something. I started attending full shows, first onscreen at Celebration! Cinema, and then live productions at Opera Grand Rapids. In 2018, I saw OGR’s production of The Magic Flute. It turned out that Mozart was pretty great. Why had no one told me?

Far from being a relic, or pretentious, or snobbish — attributes commonly misattributed to the art form — opera turned out to be generous, spectacular, full-hearted. It’s a marriage of image and sound, a way to tell elemental stories through beautiful music.

So I watched, and I wrote. And I started to get this itch. What would it be like to contribute to these shows? To work alongside a group of people dedicated to putting together something special?

Around this time, Rod, a friend, suggested that I put in for a supernumerary role. I nodded sagely, said something noncommittal, and later looked up “supernumerary.” I learned that it referred to onstage roles requiring no singing and dancing. That was perfect: I can’t do either.

I reached out to Opera Grand Rapids, offering my services for Turandot. It’s a big show; there are lots of super roles: super executioner (I didn’t have the physique to execute anything but a cheeseburger); super temptress (please); and super guard. I got an e-mail asking me to advise whether I could commit to the rehearsal schedule. Yes, I could.

My 10-year-old niece, Hadley, was accepted into the children’s choir. She had to learn to sing in Italian. I had to learn not to trip over my feet. The challenges stretched us both.

Over two and a half weeks, we rehearsed. The time passed in a blink. We found ourselves onstage at Devos Performance Hall, moving through our final dress rehearsals. (Niece Hadley said, “I’d be so nervous if my first time onstage was at DeVos.” Oh! Great!).

I struggled during my final rehearsal. Missed cues. Walked onstage only to realize my mask was still on, and then, later, did the same thing with my glasses. Realized too late that my red staff was missing from stage left, so grabbed a gold one (note: if you’re Team Red Staff, never grab a gold one). My only hope was that my opening night performance would be bad enough to be not just embarrassing, but epic, the kind of disaster that makes people laugh decades later.

But opening night was great.

Having gotten the nerves out, I could calm down and understand the importance of what was happening: I was there, onstage, watching Kristin Samson sing her heart out. I was backstage, standing among a choir, surrounded by some of the most beautiful music ever made. I found myself shivering in gratitude.

I suspected, going into this, that I would walk away with a greater understanding of the work that goes into these productions. And I did. Dozens of talented, serious professionals poured their energy into this show. In a small way, I got to be part of that.

That first evening, I found myself walking in the parking garage with Maureen. “You know,” she said, “I don’t do a lot onstage besides walk around. But at the same time, it feels like I got to do something really special.”

That was both true and false — she did more than just walk around. But yes: We were part of something really special.

Tweet
Published in Theatre
More in this category: « Review: The Beauty of Life Shines in 'Every Brilliant Thing' Blue-Eyed Hag: A Prequel to Shakespeare »
Login to post comments
back to top