Blue-Eyed Hag: A Prequel to Shakespeare 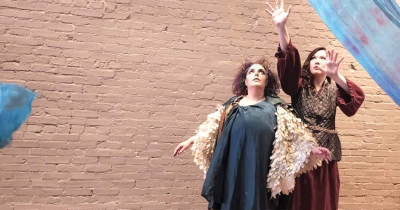 In the midst of the pandemic, playwright Jim Lair Beard found himself with two particularly valuable raw materials: energy and time. Rather than use them to bake sourdough bread, as so many of us did, he baked a trio of plays: “Shakespeare-adjacent plays,” he called them — two sequels and one prequel, taking off from Romeo and Juliet, Twelfth Night and The Tempest.

Blue-Eyed Hag is his prequel, telling of the events that led to The Tempest. In Shakespeare’s play, Sycorax, the witch, is something of a mystery. We never hear from her; we only hear of her, from others. We’re told that she has power enough to control the moon, and that she was exiled to the play’s island, rather than killed, for an unspecified reason (perhaps that she was pregnant — pregnant with monstrous Caliban).

Writing a prequel allowed Beard to explore her character, providing the pleasure of fleshing her out, and of allowing her to peer into what will come. “She has this power of prophecy,” he said. “She can give inklings of the future.” She foreshadows, in other words, events of The Tempest.

Viewers familiar with Shakespeare’s play will, of course, get more out of this one. Still, Beard designed it to be capable of standing on its own. To test its effectiveness on people unfamiliar with The Tempest, he invited several of them to Zoom meetings. They enjoyed the play, even those who speak English as a second language.

It was important to Beard that the language of the play felt inspired by Shakespeare’s example but not enslaved to it. “I wanted the feeling of Shakespeare,” he said, without introducing unnecessary distance through the use of words that have grown obscure or changed. “I don’t want to try too hard. There are pitfalls in that.”

But let’s hear from Audrey:

Youth stations itself too far in advance. We that are past the passions of youth dare not station further ahead, for that way lies the grave, and yet we folly in looking backward too, for that way sadness comes. If this be called middle life, then I think it be old.

See? The words are polished, smoothly rhythmic, and gently punning. The view of middle age they present isn’t the only view available, but it’s a common one; reading (or ideally, hearing) the words, you both understand something of the character, and feel within yourself a chime of recognition.

Sycorax, exiled from her native Algiers, gives birth as soon as her feet touch the sand. Meanwhile, a wedding is to take place, a wedding uniting warring families. Sycorax and her newborn son will find themselves in the middle of it all.

The story is one that straddles genres. Beard aimed for poignant and haunting moments, but also moments of comedy so broad it speeds past slapstick and into the realm of cartoons. You might not think a 10-year-old would enjoy a prequel to a Shakespearean play. Beard has aimed to prove to you wrong.

That isn’t to say there’s nothing below the surface or the sand. A scholar, Beard understands the post-colonial resonances. Deeper meanings are available for those who want them. But, ultimately, he said, “I wanted to write a story about a strange woman in a strange land.”

The play will premiere in June, thanks to Pigeon Creek Shakespeare Company and its Executive Director, Katherine Mayberry. Mayberry attended a Zoom reading (decidedly on the Shakespeare-familiar side of the chapel), enjoyed the play, and decided to put it on.

Tweet
Published in Theatre
More in this category: « Playing My Small Part: Onstage with the Opera Review: 'Figaro' is a Delightfully Charming Farce Full of Fresh Talent »
Login to post comments
back to top