Review: 'Blue-Eyed Hag' is the Perfect Introduction to Shakespeare 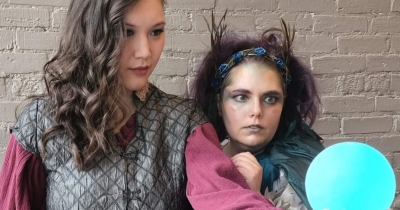 One of the immutable Laws Of Marketing states that, having written a prequel or sequel, you must declare that it can stand on its own. You can no more disobey it than you can disobey the law of gravity.

So it’s unsurprising that Jim Lair Beard, author of Blue-Eyed Hag, would say that you don’t need to know The Tempest before watching his prequel to it. Fortunately, that statement doesn’t just conform to the law; it also happens to be true.

The world premiere of his play took place at Saugatuck Woman’s Club, which has grown liberal enough to permit the entry not just of multiple women, but, indeed, of men. A pretty, intimate space, it served well for Pigeon Creek Shakespeare Company, a theatrical group skilled at making the audience feel part of the show.

As the play opens, Sycorax (Julia Verstraete), a powerful witch, has washed ashore on the island of Kytiff. Recently having given birth, she holds her newborn son, Caliban, close. A fisherman, finding her, escorts her to the home of the queen.

Sycorax is not the only visitor to the island that day; coming from the realm of Chauthak is a ship bearing its king, his son, a counselor and companions. Prince Egan Gaelien (Chaz Albright) is there to marry Princess Kendra Tantry (Kimi Griggs), to end years of war between the realms.

Egan isn’t sold on the idea. Kendra is, though. She’s gazed at his portrait for so long, investing so much affection into who she imagines him to be, that she can’t help skipping and singing, now that he’s almost within reach. It could be too much, but Griggs has a real talent for big emotions and grand gestures.

Sycorax, having arrived, soon sleeps. Queen Edith Tantry (Sarah Stark), a lover of babies, can’t help herself: she orders Audrey (Katherine Mayberry) to steal into the witch’s room and get the baby, just for a moment, just so she can hold it. Audrey doesn’t like the idea, but she agrees. In the first of the play’s troubling moments, the queen gazes upon the infant and is horrified.

From there, the play achieves a remarkable balance of humor and dark fantasy. At times, what seemed to be the former is revealed to be the latter, as if what you had taken for a frozen red slushy began to clot.

Impressive as that balance is, the language matches it in achievement. It sounds Shakespearean, but without recourse to words that have fallen out of understanding; in other words, it’s always clear. If it never reaches the heights of Shakespeare’s best plays, well, what does?

The plot moves quickly, but not so quickly that the cast doesn’t get chances to shine. Several took full advantage of them, including Sarah Stark, who always brings joy to her performances; Kat Hermes, who throws herself fully into the role of Nyx, a funny and put-upon spirit; and the aforementioned Griggs, who retains her charms even after being transformed into a pig-woman.

Central is Julia Verstraete. We have to believe that she’s fierce, loving, and merciless, utterly devoted to her son, and capable of drawing on dark powers to achieve her ends. Verstraete was the right choice. Watching her, you have the sense of barely restrained anger, and you understand that sooner or later she’ll drop the restraint.

The play ends in awful revelation and dark magic. The direction and use of sound are particularly effective here. Afterward, as I walked through Stranger Things neighborhoods to get back to my car, I kept thinking of those final moments. Even the rabbit I saw in a darkened lawn looked creepy.

Yes, lovers of Shakespeare will enjoy it. But I’ll go further than that: People new to Shakespeare
would do well to start here, to get a sense of the language, and the storytelling style, before moving on to The Tempest. Teachers of young people should move Heaven and Earth, open trees, board ships: whatever it takes to get them to the show.

The show runs through July 3rd, playing in several cities and venues around West Michigan. More information, as well as tickets, can be found here: