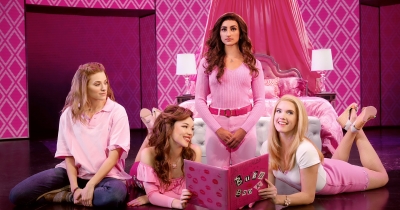 Mean Girls was released 18 years ago, in 2004. Children born at the time graduated high school this year, having survived the gauntlet that the film depicts: a gauntlet of pettiness, deception, and casual cruelty.

The film, a smart, meme-worthy comedy, succeeded both as tonic and corrective; funny enough that its best lines are still quoted today (“Get in, loser, we’re going shopping,” among others), it also contained a commonsense sermon: girls need to build each other up, not tear each other down.

Five years ago, a musical version premiered in Washington, D.C. It went on to Broadway, where it played until COVID-19 forced its halting and, finally, its closure. The touring production is on stage at DeVos Performance Hall through June 26th.

The show begins with “A Cautionary Tale,” sung by Janis (Lindsay Heather Pearce) and Damian (Eric Huffman). As the title suggests, it’s a fourth wall-breaking summary of what’s to come, sort of like a Shakespearean prologue with jokes.

The action quickly moves to Africa, where Cady (English Bernhardt), a teenage girl, sings about how she yearns for something more. “It Roars” is a neat inversion of suburban ennui; instead of wanting to escape her dull hometown, she wants to escape the glorious savanna with its wealth of wildlife (“None of my closest friends even has hands”).

Cady and her parents move to America, where she will have to navigate a new form of wilderness. High school proves to be its own rich landscape, with its own fascinating but dangerous animals. Chief among are The Plastics, a group of polished girls led by beautiful and cruel Regina George (Nadina Hassan). In maybe the show’s best song, “Apex Predator,” George is cast as the most dangerous creature around.

Cady finds herself increasingly involved with The Plastics, each of whom has a distinct personality and role. Gretchen (Jasmine Rogers) is loyal to a fault, and beyond it. “What’s Wrong With Me?” allows us a chance to peer behind the curtain and see the scared and confused girl hiding there.

But Karen (Morgan Ashley Bryant) is the one to watch. Karen...Karen tries her best (“My name is Karen, I may not be smart,” she sings). She brings a winning sincerity and an equally winning confusion. In a standout number, “Sexy,” she conflates modern feminism with inappropriately hot Halloween costumes (sexy Rosa Parks?!). It’s impossible to dislike Karen.

And, finally, there’s Regina George. The role asks a lot: to succeed in it, you need to be imperious, terrifying, and cruel—but we also have to see through the chink in your armor. Hassan is most convincing when she’s stalking the savanna; if her vulnerability never quite convinces, that’s less due to the actress than the writing, which didn’t find a way to get us there.

Ultimately, what do we want from Mean Girls? Mostly, we want fun: campy songs and special moments sprinkled on top of an ultimately sweet story. A cupcake, in other words. In its best moments, Mean Girls is that cupcake.

While some of the songs were memorable, not enough of them were. And a late plot development’s awful ramifications are to a large degree brushed aside. Still, how often do you call to mind the last cupcake you ate? And, really, was the show supposed to dwell on bleakness?

After the show ended, I asked Gemma, my nine-year-old daughter, what she thought. She said it was the best show she’d ever seen (The Play That Goes Wrong and School of Rock tied for second). Asked why, she responded that she liked the songs, and that Regina’s butt was funny. She didn’t say it, but I like to think that something of the message sunk in, too. I remember what high school was like. She’s going to need it.

Tweet
Published in Theatre
More in this category: « Review: 'Blue-Eyed Hag' is the Perfect Introduction to Shakespeare Working In the Wings: How Theater Gets Made »
Login to post comments
back to top