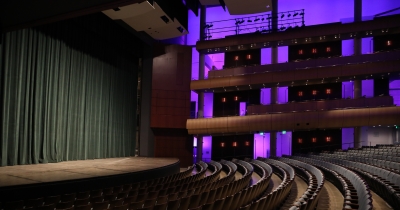 For some of Broadway Grand Rapids’ more eagerly anticipated programs, such as this past winter’s Hamilton and Mean Girls in June, the 2,543-seat performance hall will very nearly reach maximum capacity, turning that extra ticket for your newly invited niece or nephew into a race against time.

Needless to say, Broadway Grand Rapids is a community mainstay that caters an enjoyable experience for its patrons at each and every performance.

“These shows tell powerful stories, help us see different perspectives from our own, and transport us to other places and times,” said Meghan Distel, president and CEO of Broadway Grand Rapids. “More than ever, we need these opportunities to connect with one another in-person and share experiences together.”

However, so much more work goes on behind the scenes, hidden away from the purview of an average attendee. Any given show that tours at the DeVos Performance Hall incorporates technical elements from a spectrum of fields: sound and projection, lighting, set construction and staging, rigging, props and so on. It quickly becomes necessary then to enlist a skilled, uniform workforce proficient in every task that needs doing.

Comprising both signed union workers and referrals, the IATSE Local 26 is the go-to labor association for most entertainment venues in the area, including Van Andel Arena, Deltaplex Arena and the DeVos Performance Hall

Once Local 26 receives an employer’s “Yellow Card” for an upcoming show (a document that lists all pertinent information regarding requested positions and areas of expertise), a local department head such as Gould will then connect with interested IATSE members and invite them to the project. The local typically learns of these gigs a few weeks in advance, and the calls are always filled-in on a basis of adeptness and seniority.

“The shows rely on the locals to be skilled in the department in which they are assigned,” Gould said. “So, we go in with a common-base understanding of the skills needed and how to complete the tasks in an efficient amount of time so we can make the curtain.”

Since productions brought in by Broadway Grand Rapids include so many technical elements, more workers are needed for a diverse set of jobs. And after a quick check-in with the company’s production carpenter, a team of IATSE workers may only have a cue sheet or tracking list to follow for preparation and practice leading up to the event’s opening night.

“As stagehands, we usually have zero idea of what’s going on until we show up for work,” Gould said. “Department heads, like the head carpenter, will have the general plan for the week, because that’ll be advanced by the show carpenter.”

And when it’s showtime, the nonexistent room for error is not lost upon Local 26’s workers.

“Everyone’s racing against the clock to get the shows in-and-up in that specific amount of time,” Gould said.

On top of this, the trusted roster of dedicated IATSE members are routinely spread thin between simultaneously occurring or consecutive events around town. It is not uncommon for one worker to be called to a job at DeVos Performance Hall, and then for that same worker to be found at Van Andel the next night. Still, IATSE members are definitively in-charge of which gigs they participate in and which they pass on.

In many instances, an  IATSE worker might shine in a particular field, such as lighting or sound production, and then be asked to work that job on subsequent occasions.

“If a certain referent demonstrates that they are very skilled in a certain area, the local takes note of that,” Gould said. “When we can apply those people into the right positions, we try to do that, because it ends up working out not only for them but for our clients as well.”

This means that for aspiring drama tech professionals, a simple registration to the Local 26’s referral list may be the first step in their career development journey. And to help train this next generation of IATSE members (or folks who’d like a refresher on the constantly evolving technology of technical theater), plenty of in-person classes, training seminars and book collections are available to you as you prepare for that first gig. Whether you’re interested in scissor lifts, knot-tying or AV essentials, there is a place for everyone at Local 26.

“I help run the labor local, making sure that people get the training they need and that problems get solved, keeping the local labor pool moving in the right direction,” Gould said. “And we are always looking for new referrants who would like to join our labor pool.”

So, the next time you’re attending a big Broadway show at the DeVos Performance Hall, take a moment and look around. Seated in your comfortable chair, concessions in-hand and coat on your lap, see if you can’t spot some of the Grand Rapids residents who pitch-in to make these productions the best that they can be.

Can you see them working in the wings?