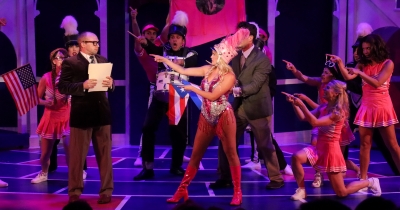 At turns, it’s an exclamation of anticipation, of surprise, of delight, of deep concern or thoughtfulness. It may, at first glance, seem girly as in, like, Valley Girl girly, which could be perceived as derogatory. And if that’s the case, you’d need to check yourself for some unexamined misogyny. In a lighthearted way.

Because that’s how “Legally Blonde: The Musical,” based on the 2001 film, nominated for seven Tony Awards, and adapted from Amanda Brown’s novel, rolls. In a nutshell, it’s smart, unexpected satire that’s perfectly pretty in pink.

And 20-some years later, it more than holds up. What once may have been deemed a celebration of “girl power” is, after #metoo and the overturn of Roe, a radical yet playful spoof that’s downright feminist at every turn—and gorgeous, to boot.

It’s a story well worth telling, especially the way Director Kurt Stamm’s vision has come to fruition, with a tremendously talented cast, bold design, and seemingly infinite clever touches and interpretations that make this show as relevant as it is fun.

With book by Heather Hach and music and lyrics by Laurence O’Keefe and Neil Benjamin, the story revolves around Elle Woods, a UCLA fashion merchandising major and Delta Nu sorority president who puts her perfectly powdered nose to the grindstone to get accepted to Harvard Law, with aspirations of winning back her Kennedy-like boyfriend Warner who dumped her for not being serious enough.

No one takes her seriously when she arrives, unable to answer her professor’s pop questions on the reading she didn’t do, donned head-to-toe in her signature pink with her chihuahua Bruiser in tow. But with the help of unlikely friend Emmett who also had to work hard to earn a place of belonging, she is chosen to intern as part of a criminal defense legal team. There she shows the power of the girl by using her sorority connections, gaydar, and lessons learned from a tried-and-true technique in flirtation, a.k.a. “the bend and snap” to more than pull her weight in trying the case.

Though workplace sexual misconduct and her ex’s new girlfriend’s jealousy nearly pull her off course, ultimately sisterhood and positivity win the day as Elle never lets self-doubt get the better of her.

This is the world in which we want to live, if only for a couple of hours. The one where liars, scoundrels and cheats get their comeuppance while good intentions, hard work, commitment and unapologetically being yourself ultimately pay off.

Of course, in a musical of this magnitude, the story is but a vehicle through which the singing, dancing, and visual delights unfold live—all of which is big and fabulous and wonderfully campy.

Jeremy Barnet’s two-tiered set with elegant staircases and moving pieces that roll on and off allow for seamless scene and place changes complemented by Jen Kules’ pink-forward lights that shift from flashy and bold in big dance numbers to subtle for more intimate duets with clever touches, such as bistro lighting that lowers and lifts in a quick restaurant scene. Costumes from Maine State Music Theater with design work from Darlene Veenstra help create the bold characters, from a sequined, fringed leotard with pink go-go boots to tailored suits and tight, body-baring button-down shirts with rolled shorts and sleeves.

Ultimately, it’s the performers who create these larger-than-life characters, and this cast is spectacular. Becca Andrews is an adorable and charming Elle who shines in leading huge ensemble numbers such as “What You Want” as well as touching tender moments in both acting and singing. You totally believe she’s committed to everyone’s success as much as her own, making good on her declaration “sisterhood forever.”

We love to hate Luke Hamilton as a perfectly self-serving Warner and Tess Marshall as a fierce, cool Vivienne. Jeff Meyer’s Emmett is endearingly deadpan and awkward in all the right ways. Samantha Souza is pure fire as Brooke, particularly in “Whipped Into Shape”; and (stepping in at the last minute for Kelly Carey) Miranda Morace nicely captured Paulette’s character arc from battered spouse who only fantasized about life to bending and snapping her way into the arms of her sexy UPS man, played to the hilt (among other hilarious roles) by Elliott Litherland.

Jay Gamboa and Antony Sanchez are a scream in “Gay or European?” largely in part to a hilarious pas de deux choreographed by Gamboa and Kurt Stamm. Their choreography takes center stage throughout the show, punctuating the narrative with well-placed flips and hip-hop infused movement that also borrows from cheerleading, drumline, Riverdance, and ‘80s-style workout videos, to name a few, in huge ensemble numbers. And it looks fabulous on this cast, who work the moves magnificently.

They’re also all fabulous singers, and the music direction from Joshua Keller is superb.

With all that talent and sheer excellence, they elevate “Legally Blonde” beyond its occasional misperception as a candy-coated pop show for tweens to its full potential as a tremendously artful show with heart that also cleverly speaks to this cultural moment. Those who have been marginalized are not to be dismissed, and what are perceived as their weaknesses may just turn out to be their superpowers.

But ohmigod, you guys, don’t think about it too hard. Just get to Mason Street and prepare to be dazzled by this escape into a pink-inflected world that makes so much more sense and makes you feel so much better than the one that exists outside the theater.

Tweet
Published in Theatre
More in this category: « Review: 'Bright Star' Shines with Intimate Moments and Powerful Music Review: The Barn Brings 'Seven Brides for Seven Brothers' Into the New World »
Login to post comments
back to top