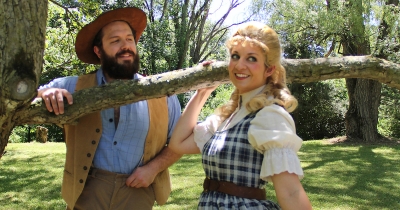 And yet, this crowd-pleasing summer stock classic, a perfect fit as the 76th season opener at The Barn Theatre in Augusta, with some clever reimagining and enormous talent, brings a much-needed 2022 sensibility to this adaptation of an adaptation based on Roman myth “The Rape of the Sabine Women.”

The story takes place during the westward expansion when rugged Adam Pontipee, long in search of the kind of wife who can not only survive the Oregon wilderness but also take care of him and his six brothers on their farm desperately in need of a woman’s touch, sees what he wants in spunky, hardworking Milly, and wins her over. She agrees to marry him without a formal courtship or full comprehension of what she’s signed up for.

While she rises to the challenge of teaching the uncouth, scrappy boys manners and hygiene, she draws several lines in the sand: between hired help and wife, all but banishing Adam from the bedroom; and exiling all the brothers to the barn after they kidnap the women they want to marry, inspired by the myth of the Sabine Women.

But in this telling, thanks to Patrick Hunter’s adroit direction and the actors’ bold performances, the focus is less on the men’s self-righteous bad behavior and more on the women’s desires, effectively and subtly transforming misogyny into a vehicle of female empowerment — all without changing the plot or any of the elements that people love about this big musical.

The original show (book by Lawrence Kasha and David Landay with lyrics by Johnny Mercer and music by Gene de Paul) has been updated in important ways since it was first adapted from the film in 1982, including new and reworked songs by Al Kasha and Joel Hirschhorn that give Milly more autonomy and personality. For example, rather than longing for “One Man”, that song is replaced by what amounts to a greater declaration of self in “I Married Seven Brothers” wherein she cries that she “won’t be their slave.” Milly is resentful and resolute, her energy matching the boisterousness of the brothers, leaving no doubt about who’s really in charge.

Likewise, but particular to this production, in initial scenes between Adam and Milly, she gives as good as she gets, sizing him up like cattle in their instant courtship, checking his teeth and sniffing his pits; and when he slaps her on the behind, she smacks his butt right back. This dramatic choice changes the tenor of their relationship, which also becomes the model for the other brides and brothers.

Of course it takes the right cast to pull this off, and Melissa Cotton Hunter’s sassy, flirty, hardworking and demanding yet sweet Milly drives this production; and Eric Morris gives Adam just the right amount of brutishness, goofiness, exasperation and joy to man-child Adam. Both wonderful singers with big, emotive voices, they create delightful, nuanced characters through dramatic moments as well as song.

There’s a primal quality to their dynamic yet each is committed their own universe. On stage, each one seems to live on a planet unto themself: her drives domestic; his largely of the world outside the home. They orbit and eclipse one another, at turns, sometimes missing each other and other times fully content, yet the tease of merging is always on the horizon. It works; and could ultimately be seen as a very progressive model of relationship.

And so follow the brothers and the brides, pursuing and desiring each other and then stepping back, moving between bold and unsure. Even though the women are technically abducted, here they clearly want to be with the men.

In the world of “Seven Brides for Seven Brothers” there are men and there are women; they have their separate ways and they also long for each other. Yet in this intelligent production, the women hold the upper hand as the men suffer for their misguidedness if not idiocy; though they’re never mean spirited even as they suffer to earn their place in the women’s lives.

And when the men and women come together, there are fireworks: joy in the dance, in the song, in the chase, in the fight, in the big and small moments both. They connect for merriment’s sake as well as survival. This show is very much a series of little romances, but it’s also ultimately about community.

This community of brides and brothers colorfully fill the stage with surprisingly distinct, often funny, and sometimes cartoonish characters wearing delightful costumes designed by Karsen. Together they create big, high-energy dance numbers with Melissa Cotton Hunter’s athletic choreography including fun social dances that are charmingly balletic while also being more than a little bit country. Some brides and brothers are stronger dancers than others with the men more physically coordinated and vocally powerful than the women.

But overall this ensemble sounds terrific, with excellent music direction from Chris Gray and a wonderful, seven-piece orchestra as well as sound design from Jake Ragotzy.

It’s also utterly lovely to behold. Steven Lee Burright’s scenic design together with Sammy Verdino’s lights recreate the changing seasons amid the mountains and forests of the Pacific Northwest, including an inventive avalanche as well as a clever wagon that are crucial to the plot. The sets for interior spaces, too, provide realism, as do the props from Matt Pierce.

The Barn’s beautiful “Seven Brides for Seven Brothers” retains the catchy songs, powerful singing, delightful ensemble dance numbers, and enormous characters as well as the basic plot and playful humor that have made it last very nearly as long as The Barn Theater itself has; but it’s smarter and bolder through the small but mighty changes and choices that bring it properly into the 21st Century, allowing us to enjoy this pleasing show anew.

Tweet
Published in Theatre
More in this category: « Review: 'Legally Blonde' is Smart, Dazzling Fun at the Highest Level Review: 'Hold These Truths' Is Storytelling At Its Finest »
Login to post comments
back to top