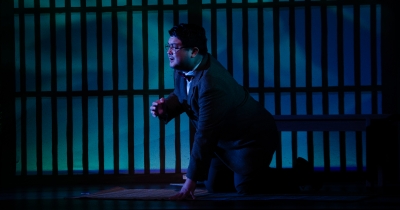 These are the questions at the heart of “Hold These Truths,” a gripping historical drama that focuses on the experience of Gordon Hirabayashi, an American citizen who defied unjust racist government orders during World War II, including curfews and internment camps for Japanese Americans, and ultimately took his case to the Supreme Court.

This one man show, written by Jeanne Sakata, is based on a true story and expands and makes real one of the ugliest pages of American history, reminding us that while the United States may purport to be founded on ideals and principles worth celebrating and holding dear, those who are entrusted with upholding them for all often fail to do so, and cause outrageous harm and injustice along the way.

Sakata’s play is based, in part, on interviews with Hirabayashi, and though it addresses one of the most shameful moments of American history, it’s also warm and joyful as it gives voice to an unsung American hero and his telling of his life story.

We meet him as a 65-year-old retired sociology professor looking back on his childhood, remembering the first time he knew he was Japanese. The son of unconventional farmers in the Pacific Northwest, his first-generation parents instilled in him the Japanese proverb: the nail that sticks out is the nail that gets hit. He is taught to conform, obey, and be inconspicuous to avoid danger.

But fate had other plans for him, and he enthusiastically takes us on the journey of his life story, from college to Quakerism, to his increasing awareness of the racism he faces (he tastes real freedom in Manhattan), to the consequences of heeding his conscience and getting arrested for it. The story wends through his peculiar legal troubles, including hitchhiking to prison and befriending a Hopi man with whom he discovers they have a lot in common, to his road to standing before the Supreme Court, wherein the ACLU backs him, then drops him, then backs him again.

The facts alone are powerful, but in this telling there is greater intimacy and an invitation into empathy that a mere history lesson wouldn’t afford. It’s a personal story that makes vivid a larger cultural phenomenon and injustice we must look at and address.

It has such impact thanks to terrific writing, graceful direction from Michelle Aguillon, and an extraordinary performance by Michael Hisamoto, who successfully navigates creating dozens of characters and tens of scenes with aplomb.

Hisamoto’s energy is astounding, his vocal gymnastics impressive, and they ways he transforms from character to character and mood to mood using only his voice and body (with the support of a minimalist set by Melody (Yu-Hsuan) Hsu, nuanced lighting design by Jennifer Fok, and period props by Gaby Castillo) for 90 minutes without intermission is phenomenal.

This is storytelling at its finest, the kind we’ve hungered for since we were children begging to be read to. A powerful story, dramatic interpretation, a gentle visual display, and the use of our own imaginations to fill in the blanks make for a riveting, important night at the theatre—and does what only theater can do.

For while it entertains us as a captive audience, it also makes us think and feel and question what it means to be American, and how necessary courage in the face of injustice is. More specifically, it leads us to ask how is history repeating itself and how have we allowed those whose “faces are the faces of the enemy” to suffer unjustly and violently?

“Hold These Truths” is a perfect opportunity to honor Independence Day in a truly meaningful way and it’s yet another show in this excellent season through which Hope Summer Repertory Theatre makes good on their promise that what they’re offering on stage—as well as hope itself—is for everyone.

Tweet
Published in Theatre
More in this category: « Review: The Barn Brings 'Seven Brides for Seven Brothers' Into the New World Review: Barn Theatre's 'Cinderella' is a Magical Marvel to Behold »
Login to post comments
back to top