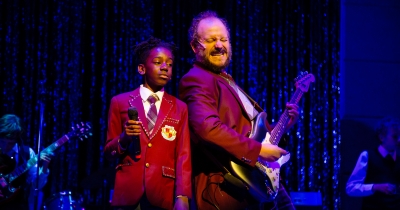 The musical, onstage at Grand Rapids Civic Theatre through August 28, might not be the most obvious choice for family entertainment. It features deceit, profanity, disrespect for authority, and actual crime; it features rock and roll, in other words. But what kid wouldn’t love that?

Morgan Foster stars as Dewey Finn, an aging schlub who refuses to sell out his dreams for middle-class security, or who refuses to get off his ass and get a job, depending on your perspective. Circumstances force his hand, however, and he finds himself teaching at the kind of school where the kids wear blazers. He does his best to do as little as possible until realizing that there are incipient musicians among his charges. A calling: he must make them soldiers of rock.

Foster is an amiable, energetic presence, belting out tunes with passion and confidence. “When I Climb To The Top of Mount Rock” has the brio of a Tenacious D track (appropriately, as Jack Black originated the role of Dewey in the film of the same name). With its evocation of record contracts, groupies, and heavenly jam sessions, it could play as sad; Finn no longer has the rock god physique he sings about, if he ever did, and you sense that the contract’s never going to materialize. Still, he’s so committed that you can’t help but smile.

To make a big group of children a major part of a live show likely strikes you as a big gamble, but the kids are great, throwing themselves into their roles without straining credibility. “You’re In The Band” is an early highlight, helping not only distinguish among the various parts, but giving each actor his or her moment to shine. Among the best are Everleigh Murphy, who plays Summer, ambitious student and band manager; and Judah Dorband, who plays quiet Tomiko and whose fire, bushel-covered, is guttering but not yet extinguished.

Finn’s charm draws out the kids, but it doesn’t work on everybody. The rest of the faculty aren’t sold on this scruffy, slightly aromatic teacher, however well-credentialed he is. Principal Mullins (Phoebe Dawson) is particularly unimpressed, setting up what seems to be a tired, cliched relationship: the rebel and the scold. But Mullins has more dimensions than seem obvious at first. Dawson is terrific, keeping things light while still giving us a glimpse through the chink in the armor.

Afterward, I asked a woman in the audience whether she’d enjoyed it. “Oh, it was beyond fun,” she said. She’d been attending shows at Civic since 1974, she told me. The kind of experience she had that night was why she kept coming back.

As for the younger rockers, my children have been listening to the soundtrack ever since. “Well, he is a good teacher,” Heidi had whispered to me during Finn’s lowest moment. She followed that with – oh – “children should know how to sing.”

Tweet
Published in Theatre
More in this category: « Review: 'The Color Purple' Is Nothing Less Than Divine Review: 'Rock of Ages' is the Jukebox Musical of the Summer »
Login to post comments
back to top