Review: 'Rock of Ages' is the Jukebox Musical of the Summer 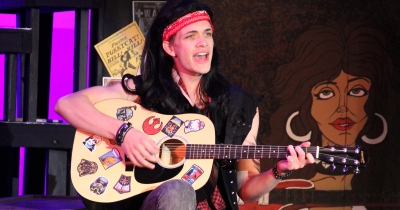 "Rock of Ages" at The Barn Theatre. Courtesy Photo

There are a few jukebox musicals that actually improve upon the songs that make up the score. Mamma Mia!, for example, takes the catchy tunes of ABBA and gives them meaning through story. Rock of Ages transforms the hits of ‘80s rock with delightful cleverness, stringing them together with a silly story and terrific arrangements.

Nostalgia for that peculiar transitional decade with all its greedy, gender-bending, glam-rock glory fuels the campy jukebox musical, and it’s a perfect fit for The Barn Theatre in Augusta.

This company positively thrives with rock musicals, and Director Brendan Ragotzy has a special affinity for Rock of Ages. He knows the show from having directed an excellent production of it in 2015—as well as from practically living it in his heyday not far from the Sunset Strip. In his hands, and with this talented group of performers, this show ain’t nothing but a good time.

I mean, who doesn’t long to escape to the majestic, acid-washed epicenter of that sexier time also known as the Reagan Era right about now? Especially when it’s as spectacular, high energy, and hilarious as the Barn stage makes it out to be?

Rock of Ages opened on Broadway in 2009, ran for more than five years, was nominated for five Tony Awards and adapted for a 2012 film. With book by Chris D’Arienzo and arrangements and orchestrations by Ethan Popp featuring songs from Bon Jovi, Pat Benatar, Journey, Poison, Whitesnake, and Twisted Sister, among other now classic rock bands, Rock of Ages constantly makes fun of itself while telling the story of Drew — just a city boy born and raised in south Detroit, a busboy at a famous metal club who wants to rock and is waiting for a girl like Sherrie, oh Sherrie, an aspiring actress, just a small-town girl living in a lonely world.

They both want to know what love is and, you guessed it, are on their way to finding it in each other, though it’s nearly thwarted by an egomaniacal rocker, some dangerous lap dances and a couple of German developers aiming to take down everyone’s favorite seedy Sunset Strip rock venue, the Bourbon Room.

Though the plot plays second to the music (which sounds extra fabulous coming from the kick-ass rock band on stage including Musical Director Chris Gray on keyboards, Troy Benton on guitar, Neal Lesenmayer on bass, and Carter Way on drums), outstanding character performances abound.

Nicholas Biddle is a terrific Lonny, totally committed as the impish and incredibly expressive narrator who provides running comedic commentary and literally pops up in scenes to make us see things anew with snark. His “Can’t Fight This Feeling” duet with beloved guest artist Robert Newman as mom jeans-wearing stoner bar owner Dennis Dupree is among the show’s many comedic highlights.

Other hilarities include Patrick Hunter as Franz and Charlie King as Hertz, the lederhosen-clad father-and-son duo intent on gentrifying the seedy strip; Luke Ragotzy is a marvelous Stacee Jaxx who fully embodies the part of ditzy bad-boy rocker, casting his spell on all the ladies; and Melissa Cotton Hunter creates a stellar southern madame with the role of Justice Charlier, who, though she’s one of two women on stage not exposing her undergarments, oozes sexuality. (As does her agile choreography, which includes pole dancing, angry mob protests, a homoerotic pas de deux, and a particularly silly aerobics workout.)

Aaron Czarnecki captures the naïveté and yearning of wanna-be rocker Drew, pulling off earnestness with a real rock-n-roll voice. He has lovely duets with Sophie Shahbazi as Sherrie, who also rises to the challenging task of playing it straight amid a sea of enormously ridiculous characters.

While the performances are great, the technical elements are crucial to creating those marvelous characters. It wouldn’t be the ‘80s without big hair, and Garylee McCormick’s hair and wig design provide sight gag after sight gag. Karsen Green’s costume designs make good on the promise of that “sexier time.” Animal print, ultra short skirts, ripped acid-washed jeans, neon fishnets with garter belts all play prominently. And Steven Lee Burright’s multi-level set perfectly creates seedy interiors and places and spaces to rock, to strip, to sometimes hook up, with a clever revolving door that serves as a playful metaphor as provides easy scene changes.

It’s a throwback, to be sure, to a time and a place and tunes well worth revisiting—all in the best of fun. Rock of Ages at The Barn is the perfect summer musical comedy that will make audiences hold on to that nostalgic feelin’.

Tweet
Published in Theatre
More in this category: « Review: Rebellious, Joyful ‘School of Rock’ Is Beyond Fun Review: Settle Into Life with ‘On Golden Pond’ »
Login to post comments
back to top