Review: Settle Into Life with ‘On Golden Pond’ 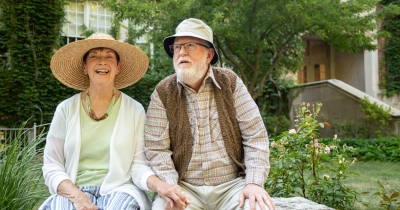 My sainted mother has advised that, when her time to die comes, she will wander off into the woods in order to spare us distress. Never mind that we won’t know where she is until a bear is found holding aloft the remains of her head.

Norman Thayer, the central character of On Golden Pond (onstage at Circle Theatre through August 27), hasn’t wandered into the woods yet, but he might not be far off. His heart has started to act up, and his memory’s fading.

As the play begins, he and his wife Ethel have returned to their summer home on loon-festooned Golden Pond. It’s a comfortable, quiet home, the kind of home where a man can take his time choosing among his many fishing hats; the set, which manages to feel cozy and lived-in, evokes this well.

It’s often said of actors that they disappear into their roles. It’s not true very often, though — even very good actors tend to show their work; you can see the effort.

As Norman, Greg Rogers disappears into his role. The character is funny, irritable, and at heart selfless; he wants to spare people, if he can. Rogers embodied it all, never making a misstep, never seeming anything but authentic. It was the kind of performance that reminds you why theater matters, and that makes you hope he decides to take on Lear.

Ethel (Bernice Houseward) is a type many of us know: cheerful, affectionate, and, on the surface at least, a little silly. Below that surface swim strength and resentment. At times, both break through. I saw the play on Friday, August 12, which I suspect wasn’t the best day of Houseward’s run. She seemed to get frazzled, restarting several lines. She hit her stride later on, proving to be at her best when her best was most needed.

That’s the thing about life: It keeps coming for you, as much as you’d like to while away the hours playing Parcheesi. Chelsea and Billy Ray, Sr. soon head to Europe, leaving Jr. with Norman and Ethel. If this story sounds familiar, that’s because it is; On Golden Pond doesn’t break new ground so much as it builds on already leveled earth. But that isn’t a bad thing. Not every meal needs to be innovative to taste great.

Tweet
Published in Theatre
More in this category: « Review: 'Rock of Ages' is the Jukebox Musical of the Summer Review: Shakespeare is Downright Fun in ‘Love’s Labour’s Lost’ »
Login to post comments
back to top