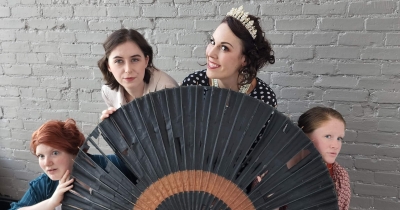 Gene Wolfe wrote that an exaggerated solemnity always indicates a lack of faith. Such solemnity can often be found among pilgrims traveling to the highest slopes of Mount Art. Among the highest of those slopes are Shakespeare’s plays, which can be staged with such reverence that the viewer can be forgiven for forgetting they’re meant to enjoyed.

Scholars generally peg the origin of the play at 1594 or 1595, around the same time Romeo and Juliet and A Midsummer Night’s Dream were written. But those are treasured, and Love’s Labour’s Lost isn’t (Roger Ebert, reviewing the regrettable 2000 film, said it was “probably the weakest of Shakespeare’s plays”). The story of four men who swear off women in order to better their minds, only to find themselves breaking their vows, it’s less a story than a vehicle for repartee.

Good news: Pigeon Creek has tricked out that vehicle: broad physical comedy has been added, and modern language, and songs; it’s the dramatic equivalent of Pimp My Ride. Together with David Taylor Little, Mayberry has retained much of Shakespeare’s punning language while adding teaspoons of today’s (the bard never wrote, “No kidding,” to my knowledge, but here it works).

Actors were given license to go big. Particularly fun was Chaz Albright as Don Adriano De Armado, a lusty, big-hearted Spaniard. He was larger than life, stomping and shouting declarations with leonine charisma, and mispronouncing words to comic effect. Kat Hermes, is Biron, is terrific (Kat Hermes is always terrific), and several others acquit themselves well, too.

A word about comedy: sometimes, you’ll hear what seem to be performative laughs at Shakespearean comedies, the laughter that says, I understand this. There may have been some of that during this performance, but there was also real, delighted laughter — the sound of an audience losing itself in the play.

The story proceeds as even someone unfamiliar with the play might expect: the men, having sworn off women in favor of study, soon find that Homer and Aristotle, for all their virtues, are nothing compared to a woman who deliberately drops something in front of you in order that she might bend over and pick it up.

A scene in which the women hide behind veils in order to test the loyalty of their suitors is absurd, but also well-played, well-staged, and funny; here, the women show agency, practicality, and appetite for fun. They’re real people, in other words, and serve as a reminder that, for all its faults, the world of Shakespeare’s time had more respect for women than we sometimes give it credit for – or that he did.

The boldest change, and the most welcome, lies in the music. There’s lots of it. The best musical moments include “It Had To Be You,” sung alternately by various lovelorn characters, and an adaptation of “I Am The Very Model Of A Modern Major-General,” altered to fit the play-within-a-play. None of the actors or actresses are likely to become famous singers, but all of them had charm to spare, which was more than good enough.

As of this writing, Pigeon Creek has one more performance of Love’s Labour’s Lost to come. It will take place on Saturday, August 20 at the Saugatuck Woman’s Club. Those lucky enough to attend will learn how enjoyable even the least of Shakespeare’s plays can be.

Tweet
Published in Theatre
More in this category: « Review: Settle Into Life with ‘On Golden Pond’ Summer Crop: Barn Theatre »
Login to post comments
back to top