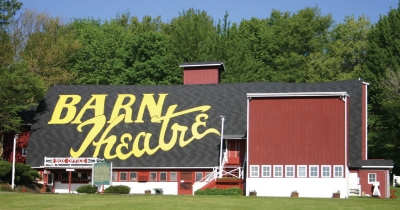 At first, to Penelope Baxter Ragotzy, Barn Theatre was just a name on a T-shirt. Ragotzy was a student at San Jose State University, where she studied under Donnamarie “Dusty” Reeds. Reeds wore the shirt, which advertised a theater near Kalamazoo, Michigan.

Where was Kalamazoo?, Ragotzy recalls thinking. For that matter, where was Michigan? Ragotzy, laughing, admits that she’s half-joking about the Michigan question. Still, she said, “I was in California, so who cares where it was?”

But, every summer, Reeds would take a group of students into the mysterious Midwest; one year, Ragotzy was among them. She had heard the stories, and she knew she wanted to be there. “You wanted to get picked,” she said.

It was a whirlwind. She found herself rehearsing one show during the day and performing another in the evening. “I remember feeling like I just couldn’t do it,” she said. “The Barn train gets running and you just have to get on. I had to catch up quickly. It was overwhelming.” But catch up she did, making a success of it all.

This was in 1986. Thirty-six years later, she is School Dean, and Barn Theatre has announced its 76th season.

“We want roles you can sink your teeth into,” she says. “We want to give our audience a reason to come back, and back, and back.” Over the years, she’s found that many patrons come to all the shows, whether they know them or not. “They trust us so much.”

They also want a mixture of shows that will appeal to families and those that will appeal to a more select, adult audience. Doing a Cinderella, which is worth doing on its own merits, will allow them to also do Misery, a dark, tense, troubling show.

Seven Brides For Seven Brothers, the opening show, is a musical based on the 1954 film. In it, the titular brothers kidnap seven young women and cause an avalanche to keep them from escaping to their suitors. It all works out, somehow. Modern men are cautioned to try this only at their own peril.

Escanaba In Da Moonlight should prove popular, with its goofy take on Upper Peninsula hunting traditions. It’s a local thing, she shares; she once heard Jeff Daniels explain that it just doesn’t work on the coasts. Maybe they don’t have porcupine urine there.

One feature all the plays hold in common is entertainment value. “It’s our responsibility to entertain,” she says. “And some of the shows are pure entertainment. Others are more thought-provoking.” But entertainment is always at their heart.

The season ends with Doubt, a Pulitzer Prize-winning play about sexual abuse possibly committed by a Roman Catholic priest. In its exploration of painful themes, and its ultimate ambiguity, it is a challenging play, and far from a natural choice to cap off a season.

As Ragotzy sees it, there is real power in ending on a more thought-provoking note. “We’re taking a chance. Why not? Why not take a chance on a beautiful masterpiece?”

She hopes the audience finishes the season having been moved, amused, and entertained. And perhaps one of the students will wear their own Barn Theatre T-shirt home, causing someone else to wonder just where Michigan is, and how she, too, can get there.

Tweet
Published in Theatre
More in this category: « Review: Shakespeare is Downright Fun in ‘Love’s Labour’s Lost’ Review: 'Little Shop of Horrors' is the Ultimate Way End to Your Summer »
Login to post comments
back to top