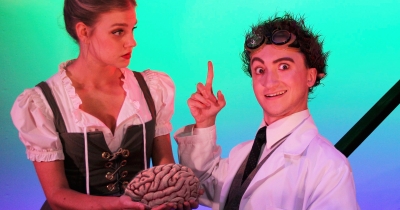 “Oh, sweet mystery of life, at last I’ve found you!” sings the young Dr. Frankenstein’s adorable madcap fiancée in a most hilarious and profound climactic moment of passion.

It’s one of many oft-quoted moments from Mel Brooks’ classic horror spoof Young Frankenstein, the 2007 Broadway musical (with book by Mel Brooks and Tom Meehan and music and lyrics by Mel Brooks) adapted from the original 1974 black and white film. Double entendre and sexual innuendo, among other iterations of Brooks’ trademark Catskills humor, abound in this delightful show that seemingly effortlessly elicits belly laughs at The Barn Theatre—the perfect place for this story and these enormous characters to come alive, ALIVE! through brilliant performances and Director Brendan Ragotzy’s marvelous vision.

A play on Depression-era American monster movies, Young Frankenstein pays homage to Mary Shelley’s original tale but reimagines an American scientist who visits Transylvania to settle his grandfather’s estate only to get swept up in the madness of “the family business” to build a monster—with the help of Inga, a sexy yodeling laboratory assistant, Igor, a hunchback with a roaming hump, and Frau Blücher, the housekeeper whose name frightens horses.

The experiment goes awry, of course, and ultimately the maniacal monster who can only grunt is transformed by love and winds up a sensation on the stage and in the bedroom. Love triangles and partner swapping ensue and life, in the end, even when recreated from dead tissue, is beautiful, worthwhile, and oh so funny.

The narrative is true to the original film with the addition of hysterical musical numbers; and the funny is milked from sight gags, comedic timing, and jokes that come fast and furious from start to finish—as interpreted by this stellar cast.

Matthew Hommel is an affable Dr. Frederick Frankenstein with terrific musicality and timing both physically and vocally; he strikes the perfect balance between wild-eyed mad scientist and generous romantic lead who plays well with Ella Olesen as a sweet, pretty Inga.

Patrick Hunter’s monster transforms to become utterly human and his comedic scenes, especially with Steven Lee Burright as a convincingly lonely hermit and Melissa Cotton Hunter as a marvelously bold and campy Elizabeth, are among the show’s highlights.

And yet some of the funniest moments emerge from the kookiest characters. John Jay Espino gives an especially spirited and playful performance as Igor; Charlie King is a brilliant Inspector Hans Kemp; and Penelope Alex creates an inspired Frau Blücher, with riotous comedic timing and meticulous exaggerations; and her Cabaret-influenced “He Vas My Boyfriend” with Fosse-esque choreography by Melissa Cotton Hunter nearly brings down the house.

Technically this show is especially well executed from start to finish, with terrific projections by Brett Burradell that together with Steven Lee Burright’s ambitious set effectively create the feel of a spooky Transylvanian castle straight out of a horror film. Karsen Green’s period costumes and Garrylee McCormick’s wigs also set mood and tone as well as help shape character; and Emily Boomer’s props are crucial to much of the comedy.

Musical Director Matt Shabala’s robust seven-piece orchestra sounds terrific as does all of the singing, from big ensemble numbers to individual solos.

Young Frankenstein is the last big musical of The Barn Theatre’s 76th summer season and there’s just one week to see this incredibly skilled company make comedic gold with this hilarious, campy romp before they transition to offering a series of plays through September. However, Producer and Director Brendan Ragotzy announced during his curtain speech opening night that they will be bringing back the wildly popular Rocky Horror Show in October, so there’s still plenty of great theater to be had in Augusta—even beyond summer.