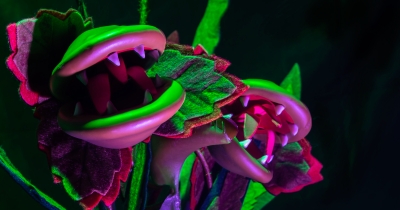 The 1982 musical Little Shop of Horrors could not be made today, but I’m not 100% convinced that it could have been made in 1982, either, at least not on Earth. Perhaps, on some distant planet orbiting some distant star, aliens discovered our radio waves, finding in them such varied materials as 60s girl group songs, commercials for plant food, and a retelling of Faust, and got to work.

That would explain things.

Whatever its origin, the musical lives on, verdantly. It’s onstage at Circle Theatre through September 24th, closing what’s been a solid season.

It opens with “Prologue (Little Shop of Horrors),” sung by Chiffon, Crystal, and Ronette (Fatima Bawah, Alexus Voss, and Erica Soto, respectively). It’s a jolt of caffeine, energizing and fun, instantly setting the tone for the rest of the show. The ladies wear silver clothing as gleaming and new as a spaceship; later, they’ll show up in schoolgirl outfits, never mind that they’ve lost the habit of attending class.

Seymour (Eirann Betka-Pope) works in the titular shop, which is hanging by a thread that’s both fraying and on fire; not a lot of people on Skid Row buy flowers. All that changes when Seymour sets by the window a weird plant he’d bought from a Chinese man (more on this later), prompting a curious passerby to come in and, not at all incidentally, buy $100 worth of roses.

Seymour calls the plant Audrey II, having named her after coworker Audrey (Matty Owen), a tall, kind-hearted woman with an abusive boyfriend. The plant fails to thrive until Seymour accidentally cuts himself and feeds it blood.

That’s only the setup, of course; what follows is a cautionary tale about selling your soul, replete with fantastic puppetry, dark humor, and surprisingly tender moments. Nearly all of the last belong to Audrey. Owen has a lovely voice and an unerring ability to project dignity, vulnerability, quiet sadness, and yearning. There is no reason for “Suddenly, Seymour” and “Somewhere That’s Green” to work as well as they do; or, rather, there is, and that reason is Matty Owen.

Much rests on the plant itself, both in its initial, etiolated state, as well as in its later immensity. The plant works fantastically, not least because of Lisa Knight’s voice, which, appropriately, is both seductive and menacing. After the show, Gemma, my nine-year-old daughter, tossed out theories as to the plant’s mechanics and did a growling impression of its voice.

Is it a fit show for a nine-year-old? It wouldn’t have been for me, I suspect; the plant’s voice would have lodged itself among the other terrors of childhood, like the face-melting scene in Raiders of the Lost Ark, the disembodied heads behind glass in Return To Oz, and Pizza The Hutt’s death by self-cannibalism in Spaceballs. But come to think of it, I loved all those movies. At any rate, parents know their kids; some will be troubled, while others, like Gemma, will be thrilled.

Certainly, there’s a lot to recommend it. It’s a joyful show. Watch the dancers, whose captain, Yesenia Cotto, is nearly always smiling. See the way they throw themselves into it. Cotto herself is a standout, as is Nicholas Bradley Gray, who in another life might have been Buddy Holly.

Earlier, I floated the idea that aliens created the musical. They didn’t, of course (or did they?), but neither did contemporary creators. Someone writing today would almost certainly leave out the Chinese man who sold Seymour the plant, in order to avoid charges of exoticism. And abused Audrey’s line about her bandage and aspirin budget: that would have to go, too, lest it tempt Audrey III, an online-only plant fed in virtual blood.

Never mind. Little Shop of Horrors, a 1980s musical based on a 1960 film, will remain timeless as long as people continue to do what they know they shouldn’t. See it soon, and don’t feed the plants.

Tweet
Published in Theatre
More in this category: « Review: Barn Theatre's 'Young Frankenstein' is Musical, Comedic Gold Review: 'Gentleman's Guide to Love and Murder' is a Powerhouse Display of Seemingly Limitless Talent »
Login to post comments
back to top