Review: 'The Revolutionists' is a Fun, Light Time Out 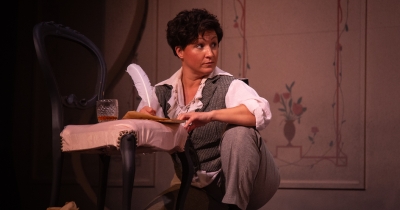 Lauren Gunderson’s The Revolutionists (onstage at Grand Rapids Civic Theatre through October 9th) takes place during those best and worst of times: the French Revolution, which cast off the crown, and the Reign of Terror, which lopped off heads.

The play begins with Olympe DeGouge (Jolene Frankey), a playwright struggling to write, setting up what appears to be that most creaking of literary conceits: the play about a play. Gunderson is aware that this might cause audiences concern, and makes reference to it, one of several times in the play that she attempts to defuse criticism by pre-empting it.

We are quickly introduced to Marianne Angelle, a Haitian spy played by Camriss Brown with stillness and, when needed, with passion. Angelle is a truth-teller, and is written with dignity; indeed, all the play’s characters have dignity. But it’s a dangerous thing for a play to include a spy; it would be more intriguing to follow her during her missions than to hear a playwright bemoan her lack of inspiration.

Rather than follow Angelle, however, we watch as wild-eyed, blood-hungry assassin Charlotte Cordray (Bryanna Lee) enters the scene. Beautiful and explosive, she’s a great, swaggering addition. Lee’s terrific throughout, both during the feverishly energetic opening and later, when things turn quiet.

Marie Antoinette, though, now there’s a role. Noddea Skidmore plays the queen as we imagine her to have been: vapid and self-absorbed, but with a surprising steel core. She drew the biggest laughs of the night. One young woman in the audience later said, “I wanna like, BE Marie Antoinette.”

Our quartet talks, sometimes shouting, sometimes urging calm, always in modern American accents and modern American language. That’s a valid choice, but begs the question of whether the playwright wrote as we do to amp up the relatability or whether she can’t do otherwise. Which isn’t to say she can’t do anything — much of the humor lands, even the dark stuff (a joke about Thomas Jefferson drew mingled gasps and laughter from the audience).

Later, the play moved into tragedy. As it does, you can feel how tight the direction (by Caitlin Hart) is. With brutal efficiency, scenes transition, leaving us in doubt as to how it will all end. If Hart hasn’t directed a horror play, she should.

For all its intermittent effectiveness, though, the play left me wishing Gunderson had given her actresses more to do (shouldn’t a spy, well, spy?). A sly reference to Les Miserables reminded me of the scene in which the bishop gives Jean Valjean the candlesticks. That scene has remained in my memory since I was a child. Remembering it, I wondered why nothing I was seeing onstage felt as weighty, even if the topics discussed were as weighty as could be.

That isn’t to say that The Revolutionists offers nothing; the costumes alone are wonderful, and there’s a lot of talent onstage. And my niece loved it. But I couldn’t help feeling that, having ordered a rich beef bourguignon, I was presented with a macaron: beautiful, but lighter than anticipated.

Tweet
Published in Theatre
More in this category: « Review: 'Gentleman's Guide to Love and Murder' is a Powerhouse Display of Seemingly Limitless Talent Review: Experience the Essence of Theater with 'Shattered' »
Login to post comments
back to top