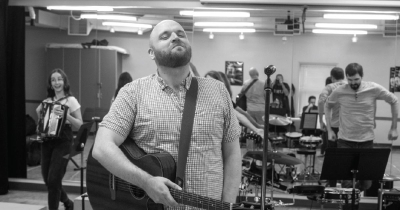 Often described as the “Off-Broadway of Grand Rapids,” local drama group Actors’ Theatre has been a fixture of the city’s community theater scene for 40 years now. From off-the-wall scripts like puppet horror-comedy Hand to God or punk rock-opera American Idiot, Actors’ Theatre has never shied away from telling difficult, upsetting and particularly important stories, especially ones that invite the audience to grapple with some of the same questions, fears and doubts as the characters they are watching onstage. Their new show, Hundred Days, is no different.

“It creates more of a relationship with the audience,” said Aubry Van Antwerp, playing the show’s lead, Abigail. “I’ve never been in a show like this, but I have seen shows like this. From an audience perspective, I felt more immersed in the actual story. I felt like I was there.”

That’s because Hundred Days sets itself apart through one major way: An actor ensemble accompanying themselves on instruments that none of them have ever played before. Even the production’s music director, Alex Hamel, is showcasing a brand-new instrument in his musical repertoire: the cello. Following in the footsteps of other concert musicals like The Lion or The Wrong Man, The Bengsons’ Hundred Days delivers a heartbreaking tale through the vehicle of a live concert format, following song after song with small moments for interaction with the audience.

“They have such a great grassroots feel to them, which speaks to the heart of this show being a folk-rock, folk-punk musical,” said Kyle Los, executive director of Actors’ Theatre and director of Hundred Days.

Abigail and Shaun Bengson tell the true love story of their lives colliding into one another, while also acknowledging the grief, uncertainty and anxiety of their past. In the end, Hundred Days is a show about mortality and making the most out of the time we have with one another, but its unconventional musical style sparks a unique connection with the audience, breaking down walls they may normally feel between the performers and themselves. The music connects the actors, too.

“And not even as instrumentalists, but as a band,” Los said. “Sometimes with an ensemble you have to do things to create a camaraderie, to make sure that their relationship shows onstage. We don’t have to do that with this, because they are learning instruments together, they are learning the music together. They are really forming a band, and that is palpable.”

Following the run of Hundred Days, fans of Actors’ Theatre can look forward to the world premiere of local playwright Kristin Andrea Hanratty’s Petty Crimes in March, which will also mark yet another reprise from Actors’ Theatre founder and beloved director Fred Sebulske. Then, the premiere workshop production of renowned Belgian playwright Mathilde Dratwa’s newest work, A Play about David Mamet Writing a Play about Harvey Weinstein, will debut in May. Following that will be Jen Silverman’s Witch directed by Georgette Verdin, as well as the long-awaited national premiere of Paradise Lost by Erin Shields, coming later in 2023.

As it’s clear to see, Actors’ Theatre provides a certain slice of live drama that we rarely see from other offerings in town, and their community of committed actors are keenly aware of that. For many, the presence of Actors’ Theatre in Grand Rapids has called them home to West MI to create more beautiful art onstage with their fellow community members, year after year.

“The reason I do it is to be here with these people and to make something everyday,” said TJ Clark, playing Shaun.  “I am ecstatic to be back and to do a show I genuinely have a connection to.”

Especially after these tumultuous past few years for the world of live theatre and performing arts, a show season like this one, that aims to invigorate a “community beyond words” into coming together to share a common experience and learn from one another, is a breath of fresh air.

And while scouting out these cutting-edge, vital stories and producing them for the Grand Rapids community has always been a hallmark of the theater’s identity, Los and his team are excited to bring another facet of their mission to life in a brand-new way: Pay-what-you-can tickets.

“We know that if we wanted folks to be able to come together, we had to make it affordable,” Los said. “Before my time here, we have talked on and off about ‘pay what you can’ ticketing, and it’s becoming more and more of a thing across the industry. We just thought this is the time. We want the whole community to be able to come to see shows.”

So, for $30, $3 or anything in between, the doors of Spectrum Theater are wide open for theater enthusiasts of all backgrounds and financial capabilities to come see live theater and enjoy it for what it is: Storytelling onstage. And that’s something that shouldn’t be kept from anybody.

Tweet
Published in Theatre
More in this category: « La Boheme and the extinction of the fat lady Mitch Albom Brings Story of Ernie Harwell to Wealthy Theatre for Limited Run »
Login to post comments
back to top