Come One, Come All: Accessibility at Broadway Grand Rapids 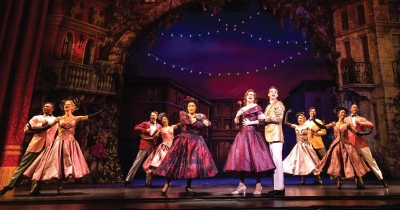 The cast of the National Tour of TOOTSIE. Photo by Evan Zimmerman for MurphyMade.

Since 1988, Broadway Grand Rapids has brought to town touring productions of the biggest, most impactful shows, from stunning new productions of classics like The King And I to shows as fresh as Hamilton; each season, a wealth of artistry and entertainment is lavished onstage.

But not everyone has had a chance to take part in that wealth. Access issues can be difficult to overcome, whether it’s the cost of the ticket, the difficulty in getting downtown, or the sense (sometimes painfully accurate) that there will be few people in the audience who look like you. Even if I can get there, some community members have asked, do I belong?

Seats For Kids is an existing program, providing free tickets to children who receive free or reduced school lunches. It recognizes that exposure is particularly important to young people, as is representation.

Marketing Director Jennifer Pascua told us that she’s been with students who’ve attended shows thanks to Seats For Kids. “It really resonated with me,” she said. “To hear them say, ‘This was my first Broadway show, and I saw someone who looked like me…’ Just the look in their eyes, as cheesy as that might be. The fact that they could see themselves on that stage someday.”

Seats For Families provides free tickets to families in targeted neighborhoods, as well as families struggling with economic difficulty, in recognition that art is not a luxury but a necessity, and that among the many things theater offers is hope.

Finally, Seats For Communities provides for outreach through targeted, community-based organizations. In some cases, this part of the program builds on existing accessibility measures; Broadway Grand Rapids has long provided closed-captioning and ASL interpretative services, but those services have not always been well-known. Building awareness will help to ensure that community members with disabilities are not excluded.

It’s an irony of theater that there is sometimes more diversity onstage than in the audience. Making sure that the full spectrum of a community can be found in its theaters’ seats does not happen organically, for the most part; it needs to be driven. Meghan Distel, who became Broadway Grand Rapids’ CEO in February, is determined to drive it, as shown through Broadway Arts Access.

The success of the program will require investment by the community through both personal and organizational donation. Those interested in contributing can do so here: mygiving.net/donate/Broadway-Arts-Access.

Based on the 1982 film starring Dustin Hoffman, Tootsie tells the story of Michael Dorsey, a struggling actor who finds success after disguising himself as a woman.

The wives of Henry VIII compete to become lead singer of a modern-day pop group. A feminist musical comedy for anyone who loves history and/or upbeat music.

The classic musical tale of Eliza Doolittle, a Cockney flower girl taken in by a professor of linguistics convinced that he can help her to rise above her station, whether she wants to or not.

New Orleans jazz meets the underworld in this retelling of the Orpheus myth. The great musician, longing for his lost Eurydice, follows her into death itself.

Disney’s 2013 film, featuring magic, music, is brought to life onstage, adding new songs while keeping those already familiar to a generation of children and their parents.

Tweet
Published in Theatre
More in this category: « Review: Experience the Essence of Theater with 'Shattered' Review: Hilarious 'Tootsie' Lands Jokes with Sitcom Precision »
Login to post comments
back to top