Review: 'Come From Away' Gives Real Hope with Depth and Complexity 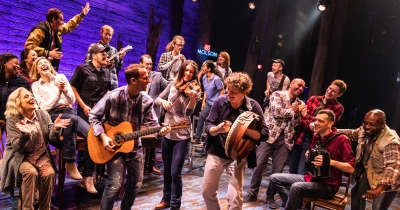 The North American tour of Come From Away. Photo by Matthew Murphy

Though every worthwhile story must contain tension if not conflict and a resolution, perhaps the best stories also speak to what’s best in us—the love humanity is capable of, for example.

The long-awaited Broadway tour of the Tony Award-winning 2017 musical “Come From Away” now in production at DeVos Performance Hall in Grand Rapids is exactly that kind of story, exquisitely told.

This Canadian-born tale, written by Irene Sankoff and David Hein and directed by Christopher Ashley, is set in Gander, Newfoundland, a place where “everything starts and ends at Tim Horton’s,” according to its mayor, a little place in Canada with a big airport where 38 planes were diverted on Sept. 11, 2001, instantly bringing the population from 9,000 to 16,000, dropping “7,000 scared and angry people who don’t want to be here” into the open arms of locals who stop at nothing to make sure they’re sheltered and made welcome.

Based on a true story, it offers a remarkable memorial to 9/11 that focuses on the extraordinary kindness and hospitality of ordinary people in the face of horrifying tragedy. It captures something gorgeous and uplifting that emerges from a terrible moment in history reminding us who we really are when we band together for our greater good and out of genuine care for one another.

It is exactly the reminder we need in this peculiarly divisive moment in history.

Particularly because it is such a glorious joy to behold this diverse ensemble cast of 12 play multiple characters—each a distinct Newfoundlander as well as a displaced passenger. There’s a terrific efficiency to this show that doesn’t call attention to itself, including a set designed by Beowulf Boritt largely composed of chairs the actors pick up and move to create distinct spaces—a plane, a coffee shop, a bus, a bar, a cliff, to name a few—on a turntable that allows terrific movement over a finite space.

At times the present is juxtaposed with the past as they shift in time through memory and song with really moving standout numbers such as “By and the Sky” from Marika Aubrey and company as well as “Somewhere in the Middle of Nowhere.”

The score is shot through with a strong Celtic influence played to tremendous effect with high energy by a fabulous 8-piece orchestra directed by Cameron Moncur that plays on stage, tucked amid the floor-to-ceiling trees on either side of the stage, though they also join in a bar scene for a big traditional session.

The subtext of the Irish diaspora and its cultural traditions is present here (warm hospitality, rhythmic language, music and dance), as is the subtle fact that refuges are warmly welcomed with the implicit belief that if the roles were reversed, they would extend the same care.

Its earnestness as well as the implicit irony given our current cultural moment is enough to give us pause. There is real depth here that eschews sentimentality. And while there are a few underdeveloped if not implausible subplots and scenes, the xenophobic treatment of Muslims is deftly addressed.

Each character is vividly drawn and fully embodied, from the town mayor to the pilot to the mother of a NYC firefighter, to an anxiety-ridden gay couple, to an Egyptian master chef, to an awkward Brit and Texan divorcee who find solace in each other’s company. To see how this tense situation pressurizes each one of them to change is a magnificent unfolding and a reminder of who we are, where we’ve been, how far we’ve come from away, and how much we’ve lost.

"Come From Away" takes us on a rollercoaster of emotion that as a live performance takes us so much deeper than the Apple+ film production can. And to see it shoulder to shoulder with thousands of strangers who, if given the opportunity—having been reminded of what extraordinary kindness, love, and generosity humans are capable of in the worst of times—might shelter and care for one another? That has a lasting impact.

If this is the legacy of 9/11, then there’s plenty of hope for us—contentious midterm election day and beyond.

Tweet
Published in Theatre
More in this category: « Review: 'Elemental Movement' is a Magnificent Testament to 50 Years of Grand Rapids Ballet Review: Wellspring Finds Beauty in Everything with 'Little Worlds' »
Login to post comments
back to top