Review: Wellspring Finds Beauty in Everything with 'Little Worlds' 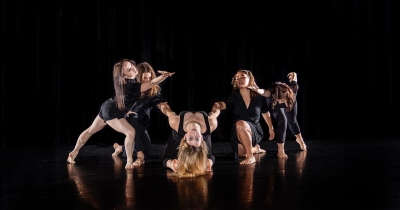 During a curtain speech before the revelation of her premiere “The Center Of . . . “, Founder and Artistic Director of Wellspring/Cori Terry & Dancers Cori Terry said when faced with choreographing a new piece for the first time in two and a half years for her entire company, she struggled with the question “How do I continue making beautiful dances when there’s so much ugliness in the world?”

Ultimately she found inspiration in Leonard Bernstein’s words after he was shaken to the core by the assassination of President John F. Kennedy in 1963. “Our music will never again be quite the same,” he said. “This will be our reply to violence: to make music more intensely, more beautifully, more devotedly than ever before.”

And so as someone who feels her mission is to bring more beauty into the world, Terry said “When it comes to making art, I stand with Lenny.”

“The Center Of . . . “ explores the idea of embodiment implicit in David Foster Wallace’s idea that “There is no experience you’ve had that you were not at the absolute center of” and centers wave-like motions reminiscent of waves hitting the shore and sea anemones opening and closing. Set to Flowers, by Julie Lowe, Ocean Waves and with lovely projections from Sam Snow, the dance closed Little Worlds, Wellspring/Cori Terry & Dancers Fall Concert of Dance. Though opening night was thwarted by the snow storm, the remaining performances were, indeed, beautiful.

In 75 minutes and two acts, Little Worlds offered five dances, both old and new, lovely and intense, with even a little bit of unconventional humor thrown into the mix.

The most exciting dance of the evening was Assistant Artistic Director Marisa Bianan’s “Absolute Synergy” in which the geometric patterns of light on the floor (designed by Sam Snow) mirrored the dancers’ bodies in bold, dramatic shifts, from a cheer-squad style tower that exploded into movement—and the lights shifted from stark to warm. Set to music by DARKSIDE, and full of surprising balances, leaning, rolling, yearning in movement, and bold port de bras with hands in prayer slicing through the air, then arms crossed, then swinging through the air, this piece felt like something truly new, the dancers speaking with their bodies.

Bianan’s “Take Back the Sun” from 2021 also made use of bold port de bras but high energy and joyful. Set to Klezmer music by Cori Somers/Red Sea Pedestrians and with simple, jewel-toned, elegant costumes by Patricia Plasko that invited focus on the dancers’ bodies and spirit of movement, the piece’s energy and frenzy grows with twists, spirals and lifts giving way to clapping and running in a circle. It’s delightful.

As is “Figure Heads”, a 1989 performance piece by Timothy O’Slynne/XSIGHT! that’s shot through with wacky humor and shows off the company’s remarkable acting chops. Complete with kazoos and a projectile ping pong ball, three dancers poke their heads and appendages through holes in the top of a giant box, effectively create a giant game of whack-a-mole and inspiring big laughs from the audience.

The opening dance, “Two Billion Heartbeats”, a 2012 piece from Cori Terry, is a gentle, lyrical piece in which the six dancers show their terrific musicality—swirling, lilting, with angular arms, deliberately lazy layouts, and lovely lifts in triads that give way to bigger, bolder movements with greater tension and higher stakes with driving leaps and upward momentum

Little Worlds shows a company paying homage to its past with a dedication to Hawkins style movement while also reaching toward a future that looks bright. There’s no bypassing the violence and challenges of this cultural moment and yet the response is to keep putting beauty into the world. Offering voices both old and new, and a commitment to the possibilities within the lexicon of movement, Wellspring/Cori Terry & Dancers continues to make art with as much devotion and beauty as ever.

Tweet
Published in Theatre
More in this category: « Review: 'Come From Away' Gives Real Hope with Depth and Complexity Review: Joy, Merriment and Family at 'A Swinging Christmas' »
Login to post comments
back to top