Review: Joy, Merriment and Family at 'A Swinging Christmas' 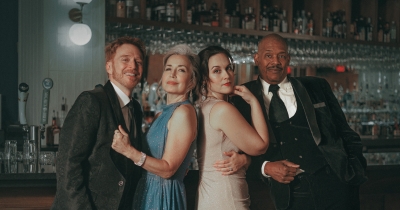 Four of his albums are dedicated to holiday songs and his trademark jazzy pop style has lended itself beautifully to the traditional and contemporary songs that make up many a festive playlist dedicated to all things merry and bright.

And this year’s holiday show at Farmers Alley Theatre in Kalamazoo is a tribute to Bennett. “A Swinging Christmas: The Holiday Music of Tony Bennett” capitalizes on his longevity, discography, personality, and remarkable ability to create holiday cheer with his music in this world premiere that opened Friday night. Created by David Grapes and Todd Olson with terrific arrangements by Vince di Mura, “A Swinging Christmas” makes for a sweet, cozy, delightfully festive night of live musical performance in the spirit of joy and merriment.

A holiday-themed, cabaret-style show wherein patrons are served cheesecake, coffee, and cocktails is a wonderful tradition at Farmers Alley this time of year, and “A Swinging Christmas” will undoubtedly be a hot ticket.

The two-hour performance centers on the songs of Tony Bennett performed by two men and two women who sing, dance, and share stories about Bennett, accompanied by a fabulous jazz trio (led by musical director Nicholas Mueller on piano) that’s so good they alone would be worth seeing.

The 32 numbers cover just about every beloved Christmas song of the 20th Century as well as iconic standards made famous by Bennett, from “Fly Me to the Moon” to “I Left My Heart in San Francisco,” performed as solos, duets, and grand harmonies from the entire cast.

Dressed in gowns and tuxes with a costume change after intermission, Paul Castree, Michelle Duffy, Missy Karle, and Tony Perry exude warmth and complement each other beautifully. Karle really shines in “A Child is Born”; she and Michelle Duffy are superb together in “I Can’t Give You Anything but Love”; Duffy is also brilliant with Tony Perry in “Every Day I Have the Blues,” and Perry is all around exceptional but especially in “Fly Me to the Moon”; and Paul Castree has terrific energy, is marvelous with Karle in “Because of You” and is really in the moment and natural as a dancer, with excellent choreography from Jeremy Blair.

They sing and dance in tribute to Bennett, never attempting to imitate his vocal stylings, and this an excellent choice, by design. “Our ultimate goal was to create a holiday themed musical that would take our audiences deeper into the ‘essence’ of Tony Bennett the man, the singer, and the creative artist, while never making a direct attempt to impersonate Bennett himself,” wrote co-creator and director of the show, David Grapes, in the program.

Indeed, this production succeeds in all the ways it sets out to do. “I love the holiday season—it’s just a very special time of the year where we go out of our way to show our family and friends how much we appreciate having them in our lives. When I hear holiday music playing on the radio or in stores and restaurants, it's a lift to my spirits,” is a direct quote from Bennett shared from the stage in between songs, and it captures Bennett’s spirit as well as the essence of this show—a most joyful way to celebrate the holiday season.

Tweet
Published in Theatre
More in this category: « Review: Wellspring Finds Beauty in Everything with 'Little Worlds' Filling Seats: Local Theaters' Fight to Bounce Back »
Login to post comments
back to top