The Book of Mormon: Don't Judge By Its Cover 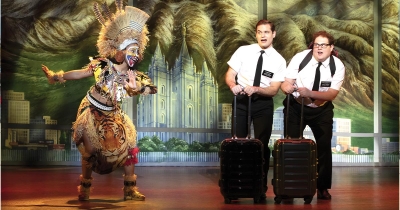 "The Book of Mormon." Photos by Julieta Cervantes

Eleven years after its release, The Book of Mormon still seems more likely to have been a fever dream than something that really happened. A musical about Mormons? By the South Park guys? A hilariously offensive but somehow still sweet musical? Next you’ll tell me that the Church of Latter Day Saints took out ads in the playbill. Wait… that really happened?

Somehow it did. The Book of Mormon proved a huge success both with critics (“The best musical of the century,” according to the New York Times) and with audiences (it’s grossed over half a billion dollars). It earned nine Tony awards, including Best Musical, and a Grammy. And, on January 27th and 28th, it will play in Kalamazoo’s Miller Auditorium.

The touring production stars Sam McLellan as Elder (Kevin) Price, a clean-cut, handsome young Mormon consumed with faith and certain he’s destined to do incredible things. He’s paired with Elder (Arnold) Cunningham, a Dungeons & Dragons kind of guy, one who looks up in awe to his self-assured partner. The two are a classic odd couple: Fit and Round, Cool and Nerdy. Together, they’ll travel to Uganda to spread their faith; finding out that Uganda’s in Africa, Cunningham responds, “Like Lion King!”

They don’t find any animal sidekicks in Uganda. Instead, they find people, people beset by calamity. Warlords are busy picking off what poverty, famine, and AIDS haven’t gotten to yet. In “Hasa Diga Eebowai,” the villagers sing a phrase that comforts them in times of trouble. The revelation of its marvelously obscene meaning is one of the show’s first great laughs. Just know that it isn’t (as Cunningham surmises), “No worries for the rest of our days.”

In the first iteration of the show, the Africans were played for laughs that sometimes verged on the uncomfortable; it was clear that creators Parker and Stone were more familiar with Mormons than Ugandans, resulting in some lazy cliches. Later changes have made the show sharper and more incisive without its veering into bien pensant skittishness.

The mission, entered into with such hope, soon takes its toll on the protagonists. The Africans insist on being flawed and human and, in the case of Nabulungi (played by Berlande Mullis), beautiful; Cunningham finds himself drawn to her out of more than concern for her immortal soul. Price finds himself doubting whether he’s where he ought to be.

The miracle of the show lies in the way it balances shock and sincerity, two strains that should each weaken the other, but somehow never do. A song called “Man Up,” in which Cunningham describes how Christ “crawled up on that cross and he stuck it out,” should be absurd. And it is. But it’s also invigorating. Song after song is invigorating. Having experienced the show years ago, I can say without irony that it both made me laugh, and moved me, more than any other show I’ve ever seen.

It must be said: you should not take the more sensitive of your friends and relatives. Actually, scratch that; you should. It’ll be hilarious.

Tweet
Published in Theatre
More in this category: « Review: Hope and Joy Abound in 'It's A Wonderful Life: The Radio Play' Review: 'Six' is a Boldly Dazzling Musical for Today »
Login to post comments
back to top