Review: 'Six' is a Boldly Dazzling Musical for Today 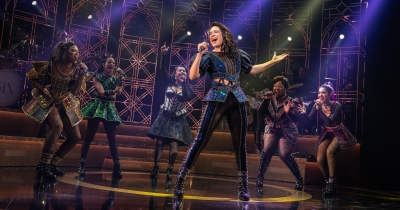 From all accounts, the six wives of King Henry VIII did not have a good time of it. Divorced, betrayed, beheaded, otherwise dead are just the headlines of their famous victimization. Or, as the rhyme that British school children learn to help them remember the fate of each wife goes: “Divorced, Beheaded, Died: Divorced, Beheaded, Survived.”

This rhyme also makes its way into the wildly popular and infinitely clever musical “Six”, a feminist revisionist history pop concert that stars the Tudor Queens as a girl group of pop divas who tell their own stories through song in a competition against each other, for “the queen that was dealt the worst hand shall be the one to lead the band.”

Currently on tour at DeVos Performance Hall as part of Broadway Grand Rapids, ”Six" puts a hilarious yet heartfelt feminist twist on the nasty realities of the 16th Century with a quirky, contemporary sensibility. It's a hugely entertaining musical for this cultural moment with an incredibly catchy pop score, bold characters, and fabulous performances.

Created by Toby Marlow and Lucy Moss while students at Cambridge University, the show gained traction at the Edinburgh Fringe Festival before hitting the West End, Chicago Shakespeare Theater and then Broadway; and with savvy use of social media as well as the release of its cast album before hitting the big stages, it had a fan base before curtain up.

Much like a pop concert, the visual impact of the show is largely from bold, flashy lighting design (Tim Deiling) and sparkly costumes (Gabriella Slade), a mash up of hyper-modern sexy and revealing along with vaguely Tudor style, that also help make each diva a distinct character, particularly with color scheme; and it also involves an all-female rock band performing on stage as part of the scenic design (Emma Bailey).

In fact, the show is entirely a mash up of old and new, past and present playing off one another to create something terrifically trendy, smart, and fun. One need not have much of sense of history or a taste for pop culture to understand or enjoy what’s going on, but an appreciation for both deepens the experience and makes it easier to pick up on witty wordplay, double entendre, and other references (including samples of “Greensleeves” throughout the score)—as well as notice the influence of pop divas from Kesha to Ariana Grande to Mariah Carey and more.

“You said that I tricked ya / ‘Cause I didn’t look like my profile picture,” Anna of Cleves, performed exquisitely by Olivia Donalson, raps in “Get Down,” one of the funkier songs in the show, while seemingly channeling both Nicki Minaj and Lizzo. The historical reference is to Hans Holbein’s portrait of her that made the King fall in love; but he then claimed she wasn’t as beautiful as the painting and divorced her.

Khaila Wilcoxon’s Catherine of Aragon, Henry’s longest-standing wife, is very Beyoncé-inspired, and beautifully so; Storm Lever’s Anne Boleyn, famously beheaded, is somewhat fashioned after Miley Cyrus, and her “Don’t Lose Ur Head” is a stitch (“LOL/ say oh, well/ or go to hell/ sorry not sorry for what I said/ don’t lose ur head); Jasmine Forsberg’s romantic Jane Seymour’s goosebump-inducing power ballad “Heart of Stone” is a turning point in the show and very reminiscent of Adele; Didi Romero’s Katherine Howard is more than a little Spice Girls; and Gabriela Carrillo is one of the finest vocal stylists on stage who shows terrific depth and range in “I Don’t Need Your Love,” which truly sparks the turn toward female empowerment and reclamation, the moment when the women eschew competition and the glorification of their victimization as their defining qualities for something larger.

It's a brilliantly embodied #metoo response straight out of the 16th Century—beautifully symbolized by the ways their voices meld as beautifully together in tight harmonies as they stand out from each other distinctly in virtuoso solos, as well as the fact the finest dancing (choreography by Carrie-Anne Ingrouille) comes in the grand synchronized numbers.

“Six” dazzles, teaches, entertains, and evokes all that and more in 80 minutes without intermission. It’s a bold experiment in what’s possible for a big musical in terms of storytelling and diverse casting. And based on the opening night performance at DeVos to a sold-out, enthusiastic crowd, it’s an enormous success.

Tweet
Published in Theatre
More in this category: « The Book of Mormon: Don't Judge By Its Cover Review: Talent and Joy Abound in 'Once On This Island' »
Login to post comments
back to top