Review: Talent and Joy Abound in 'Once On This Island' 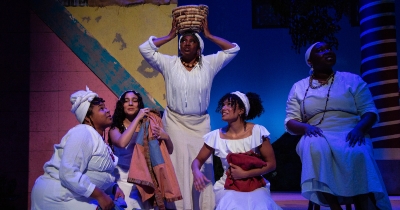 "Once On This Island" at Grand Rapids Civic Theatre. Courtesy Photos

Anyone reading Hans Christian Andersen’s “The Little Mermaid” after watching the Disney film will find much that’s familiar. Its title character, who lives with her father and sisters, dreams of the world above her watery home. At 15, she finally visits it; she saves a prince from drowning, and falls for him; she trades her voice for legs; she returns to the surface, naked, and is found by the prince; she is taken into his world.

Here, the stories diverge. He loves to watch her dance, unaware that every step she takes fills her with terrible pain. Due to a misunderstanding she could clear up if only she had a voice, he believes another girl, a princess, was the one to save his life. He marries the princess, and soon the mermaid throws herself to her death, and her body dissolves into foam.

It’s from this more nuanced story that Once On This Island (Grand Rapids Civic Theatre, January 20 – February 5) takes its inspiration. Set in the 19th century and in the French Antilles, it wrestles with issues of class, color, and moral challenges, all while telling a story that in its broad strokes has the simplicity of a children’s fable. So it’s sad, sometimes, and angry; that’s not surprising. What’s surprising is how joyful it is.

Ti Moune (Alanna Potter) should, by all rights, have died in a terrible storm. But the gods take pity on her, placing her safely in a tree. Two peasants, a husband and wife, find her, and debate what they should do. Too old to have children, they decide that the gods have spared her for a reason, and they raise her as their own.

She grows into a wide-eyed, hopeful young woman (played now by Ja'Leeyna Dooley). She dreams of the other side of the island, where strangers, descended from the French, drive fine cars and live in palaces. “Waiting For Life” is her “Part Of Your World”: a song of quiet yearning. The song reaches the ears of the gods, who laugh—at least, they laugh at first.

Into her world crashes Daniel (Gabryel Shepard), a handsome and wealthy young man. Nearly dead after a car accident, he’s brought back to health by Ti Moune’s ministrations. She discovers that she loves him. Unlike Ariel, she’s retained her voice, but will her voice be enough to cut through the sad realities of the class divide?

Dooley has a powerful voice and the ability to project innocence and hope, which makes a cruel moment late in the show all the more effective. Never did I love the play more than when, tentatively but with stillness and resolve, she began to dance. Many members of the cast surrounding her are making their debuts with Grand Rapids Civic Theatre, and some are better than others; the accents, flawless in some cases, sometimes wavered.

But there was a lot of talent onstage. As Asaka, Michael Davis Arnold brought resonant vocals, confidence, and clarity; Arnold was consistently a delight. Keon Atkins infused Papa Ge with demonic charm. And Alexus Voss, as a storyteller, dancer, and singer, radiated charisma; her smile could power Manhattan, which made it all the more shocking when, as Andrea, she let it wilt.

Sometimes, everyone sang, everyone danced. Those were great moments, even as they served as reminders that it’s all too rare to see a Grand Rapids stage completely filled with Black actors and actresses. Why not The Tempest, with Alexus Voss as Miranda? Why not Michael Davis Arnold as Willy Loman? One day, maybe. In the meantime, Once On This Island offers a platform for strong voices and a story with deep echoes.

Tweet
Published in Theatre
More in this category: « Review: 'Six' is a Boldly Dazzling Musical for Today Review: 'The Book of Mormon' at Miller Auditorium is Huge and Hilarious »
Login to post comments
back to top