(above) Momoyo Torimitsu "Somehow I Don't Feel Comfortable." (below) Guy Overfelt's life-size replica of the Trans Am from Smokey and the Bandit. COURTESY PHOTOS

Pink bunnies, a life-size Trans Am, reclining Buddha — they have more in common than you think.

They’re all large, inflatable and considered works of art, at least at the Muskegon Museum of Art.

Whimsical and fun inflatable installations have taken over MMA’s Walker A and B galleries as part of the traveling Blow Up: Inflatable Contemporary Art exhibit.

“It just looked immediately appealing in that it was very contemporary and very different than anything we’ve done here,” said Art Martin, senior curator and director of collections and exhibitions.

The exhibit explores the imaginative ways that artists use air and unique, flexible materials to create large-scale sculptures that are accessible, yet rich with meaning. The works also help open a dialogue about pop culture and social norms. They have an all-ages appeal, which is fairly unusual for art being made in the region.

“I think that makes it a unique opportunity for our guests to see this without having to go to a bigger city,” Martin said.

The exhibit arrived in a relatively small box and came with a 70-page installation manual. Then, MMA staff had to use fans and pumps to inflate 12 large-scale sculptures and a group of smaller works. Many of them are made of the same vinyl material used for bounce houses and rely on continually-blowing fans.

“The first impression for our guests is just how much the size of these things and the sound of the fans are going to be completely alien within our space,” Martin said. “They’re big, especially for kids. They’re going to be dwarfed by the work.”

The exhibit, funded through a grant from the National Endowment for the Arts, was organized by the Bedford Gallery at the Lesher Center for the Arts. It's currently on a national tour. One piece was commissioned for the exhibit, while others were acquired from artists who create inflatables and were invited to contribute to the show. 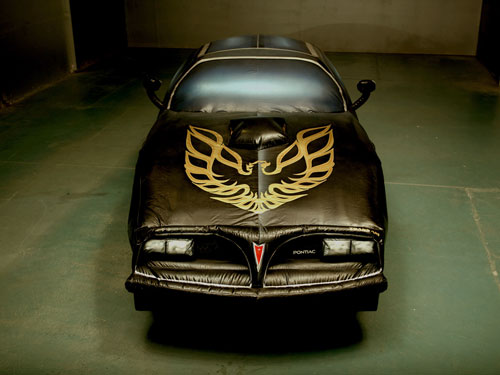 For instance, the 14-foot-tall pink bunnies debuted in Japan and served as a commentary on the small spaces that Japanese people have to live in, as well as the popularity of the Hello Kitty phenomenon among children and adults.

Some pieces will be familiar to viewers, while others bring the wow factor, like the Trans Am. Martin noted that the car typically embodies masculinity, power and speed, and yet it’s a big, squishy sculpture.

It’s a unique and interesting exhibit that’s intended to play with the visitor’s sense of scale, along with color, sound, texture and the very idea of what art is. Other large-scale sculptures include the reclining Buddha figure, two superhero robot figures and an elephant.

“There is a strong sense of play to it that I think gives it a very welcoming nature, and then once you’ve made that introduction, there are those other themes to explore,” Martin said. “It’s the big gorilla in the car lot. It’s the waving guy outside the furniture store. They are trying to do more than get your attention — they’re trying to communicate ideas to you.”