The photography of recent Kendall College of Art and Design graduate Jeen Na intends to act as a study of the phases of living — all of the situations and circumstances people encounter and how they choose to process them. Ahead of his body of work, As Much Heaven As Earth, being featured at the Grand Rapids Art Museum during ArtPrize Nine, Na chatted with Revue about the themes and art that inspire him, and where he hopes to take his burgeoning career.

Your work is primarily focused on portraiture. When you shoot a portrait, how do you go about capturing the essence of a person?

I like to capture people as they respond to certain questions that I ask them. They’re questions that I’m genuinely curious about, and maybe they’re a little unconventional. To give you a small example, once I was having a drink with someone and, at the time, he and a girl were going through a rough patch in their relationship. When he was done talking, I asked, ‘Is she kind?’ He didn’t know what to say at first.

That’s such a simple question with so many layers. I imagine when people try to process answering a question like that it brings a lot of emotions to the surface.

You get really unique expressions. Really honest and genuine. Every portrait that I’ve ever been happy with are the ones that don’t have a singular, apparent emotion.

What inspires the mood of your photographs?

I listen to a lot of music while I’m editing. The most recent photoshoot on my Instagram was heavily inspired by Sufjan Stevens’ most recent album, Planetarium. Another photoshoot I did with my friend Rik Horoky mixed contemporary photography with an anime influence. When I was editing those images I was specifically listening to the original soundtrack from the movie Paprika, which was created in 2006 by Satoshi Kon.

You have a body of work called Looking | Looking Away, and also a project called Between Sheets. The thematic material seems linked. How did these two projects explore that idea differently?

The images for Looking | Looking Away were taken over a week while I was in LA with my friends, Bob and Ryan. Bob is quadriplegic and was drawing a lot of stares and sharp looks. It made me really sad to see that happen to a friend. So, I started taking photos of the people who were looking at him and then looking away once they saw my camera. The first thing that they were looking at is how they were different from him. It was kind of a reality shock in that everybody wants to be different almost to the point where it’s hurtful. You can own individualism, but you have to understand that there is some base level of relation.

What about Between Sheets?

Between Sheets reflects my feelings on the basic process of coming out to one’s self. Even for people who might have grown up in a ‘glass closet,’ me in particular, they might have this misunderstanding that they’ve never had to come out. But it’s really wrong to think that. It’s still a process that you have to go through, and it links all generations of people who are queer.

How did you capture that process?

I conveyed the first stage, discomfort, by swirling ink in a dish of milk, which looks really unsettling. I would say that grief is a more elevated feeling than discomfort, so I chose to levitate ink in water for the second stage. Acceptance is the hardest stage to get to, like ripping off a band aid. It’s the same as gradually pulling a sheet off, which I captured in the third stage.

What new directions do you see your work going in post-graduate life?

I’m focusing on studio and editorial-based work. I absolutely adore manipulating lighting. The way I would describe it is that you flip a switch and you watch the sun come on. I guess that’s why I like photography. It’s all about control. When you put the camera up to your eye you put the frame exactly where you want it, and that immediately sets a perimeter. But I’m also giving an earnest effort to accepting the ebb and flow of things, and not to domineer that. If anyone out there has advice on how to do that better, I would be more than happy to hear that from them. 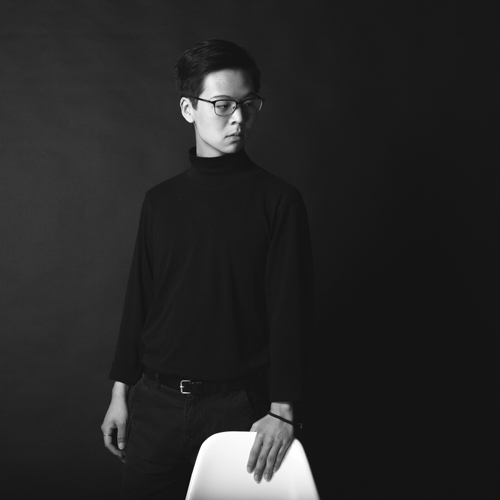 Tweet
Published in Visual Arts
More in this category: « Jovannah Nicholson: Pulling Spirits From a Wheel Esan Sommersell: Aspiring to Inspire »
Login to post comments
back to top