No Vacation: 'Resort' is a voyage of ‘empathic unsettlement’

Above: Video still from Resort (2016). Below: Andrew Ellis Johnson, Until Human Voices Wake Us series (1999). All photos courtesy of the artists.

Don’t let the title of Resort fool you, or the still image of empty beach chairs and blue umbrellas with the beckoning sea as a backdrop — this is not a show about vacations.

The works in Resort, opening this month at The Fed Galleries of Kendall College of Art and Design, explore deeper themes around the political policies, social issues and biases that shape the way people see refugees.

As creators of the exhibition, artists Susanne Slavick and Andrew Ellis Johnson are often subtle, yet open and intellectual about the political messages in their work.

There is meaning behind the chairs facing away from the water and toward the viewer — in this case, “resort” signifies “a last resort.” While many vacationers flee to beachside resorts to find respite, refugees flee their homeland as a last resort, Slavick said.

All around the world, those two worlds collide where the sea meets land. For many refugees and immigrants, the first point of contact with a new country (and new home) is often a shore.

“In fact, some vacationers in Cadiz and Greece have watched refugees wash ashore, in and outside of boats,” Slavick said. “I want us to think of the intersection of these two worlds, of stability and comfort versus upheaval and desperation.”

While the show isn’t didactic or full of dramatic images of refugees, Slavick hopes viewers walk away asking hard questions of themselves and national policies.

“There’s a variety of work with different imagery, but altogether, I hope the show will prod people to consider what role we play in the future of displaced people,” she said. “Are we going to be generous or are we going to be selfish?

“Somewhere in all of our families, we have come from somewhere else. We want to consider what makes people flee, and imagine their journeys though we know many of us can never know that anxiety or terror. In much of my work, I strive for empathic unsettlement.”

The show came about after Slavick met Michele Bosak, KCAD’s curator of exhibitions, at an Illinois exhibition Slavick had organized. The show was titled Unloaded, exploring the use and impact of gun violence, and it ended up visiting the UICA in 2016.

Resort includes a diverse body of work, including prints on paper, paintings and a new series of drawings by Johnson.

“I’m really excited about getting back to monochromatic drawing, albeit on a larger scale, in this case to an unadorned black ink wash on paper informed by new art historical sources,” he said. “In the exhibition, the viewer will encounter drawings that cannot be seen from a singular vantage point but invite an active searching and entering. Details of individual circumstances are specific and yet merge into a larger mass of struggle.”

Johnson describes his Until Human Voices Wake Us series from 1999 as “a drawing cycle that creates a contemplative chamber of mirage, of salvage, of dust. A series of individual life vests are drawn in blood and ink on a field of cracked earth.”

Johnson hopes the show, described as contemplative and psychologically and empathetically rich, makes viewers more aware of refugees’ dire plight and persecution. The art should move the viewer to consider the dehumanizing aspects of life as a refugee: not being able to work, study, move, make a home, contribute or assimilate into the society where they are held.

“The label of ‘refugee’ is a stigma as well as a punitive, sometimes arbitrary, bureaucratic designation,” he said. “Refugees have not voluntarily fled but have been forced to escape desperate, life-threatening circumstances. A ‘refugee’ lives in a state of statelessness, having been stripped of the rights and opportunities that everyone is born with.”

Slavick’s Threadbare is a project that juxtaposes the harmonious and meditative with the muck and mire of realities on the ground, portraying damaged “magic carpets” that are crumbling and falling apart.

“People can look at them as beautiful decorative works, but if they linger, they might suggest the precarious situation of people in flight,” she said.

Meanwhile, her Ghost Ships series focuses on sea vessels and includes historical images from fables and myths of peril and survival taken from both eastern and western cultures, contrasted with life jackets piled on decks, floating around the wreckage and scattered about.
“They’re not saving anybody,” she said. “The whole scene is devoid of any human beings. You feel it’s either too little or too late.”

Slavick writes of the series: “Ghost Ships exposes the consequences of indifference, resentment or fear of ‘the stranger’ in the denial of safe and humane harbor.” 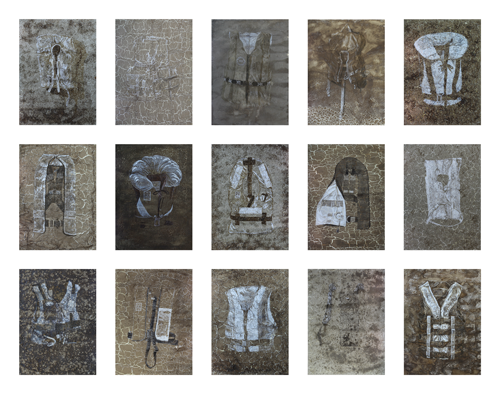 Resort includes the title video, a collaborative effort of Slavick and Johnson, where the immensity of the sea is oddly stilled. At least 5,000 refugees and migrants died in 2016 while crossing the Mediterranean. Their death rate has almost doubled this year.

“If you take it apart and watch long enough, it is sort of about turning one’s back to the sea,” she said of the video. “The stillness versus the upheaval and also that these chairs are objects of leisure. We’re often spectators. We watch this from a distance.”

There are now more than 65 million refugees, asylum-seekers and internally displaced people around the world, according to the United Nations High Commissioner for Refugees. These people are in desperate situations, having been driven from their home by conflict and violence or human rights violations.

Germany has increased admittance of refugees, accepting more than 1 million in the past two years. In the first half of 2017, the country issued 60,000 family reunion visas, almost half to Syrians and Iraqis.

In contrast, President Trump has scaled back refugee admissions, inciting fear and division among Americans. In 2018, the USA — with a population four times the size of Germany’s — will admit no more than 45,000 refugees total, Slavick said.

“Those of us not needing to flee live in comparative luxury,” she said. “Yet many Americans choose to feel invaded or believe their culture is being diluted or, more extremely, even contaminated. We need to decide who we are — if humanity supersedes nationalism. We hope these works, directly or indirectly, prod us beyond hostility or indifference.”

Tweet
Published in Visual Arts
More in this category: « Park of All Trades: How a building in Kalamazoo is helping to keep the arts alive Triple Threat: Three new, and very different, exhibits move into the GRAM »
Login to post comments
back to top