An array of unique art and site-specific installations that explore themes of identity, both personal and political, make up the UICA’s winter exhibition.

While technically a group show, Enmeshed consists of solo exhibitions by five accomplished, yet eclectic artists and gives each one ample space to showcase their talents.

It was originally planned as part of a Coming Home series, but Executive Director Miranda Krajniak thought the artists’ work warranted a spot on UICA’s exhibition calendar. The exhibit encompasses the first two floors and a prominent space facing Fulton Street.

“Many of them are making very different, new works,” she said. “There are really key elements of how they are working with identity.”

Some artists were invited to participate, while others were included after reaching out to the UICA. The group includes professional artists and professors from Michigan and beyond.

Artist Tyanna J. Buie’s series of prints of playground swings weaves in messages about her chaotic childhood and innocence lost. Buie, raised in foster care, grew up in Chicago and Milwaukee and moved to Madison, Wisc. for graduate school, where she took the photos used for the prints.

Inspired by a window piece she did in Madison, the UICA installation touches other themes hidden in the images related to transitions from baby to adult swings.

“I missed being able to fit in the baby swing,” she said. “When I outgrew that swing, I remember being so depressed and so I just had this association with having to grow up.” 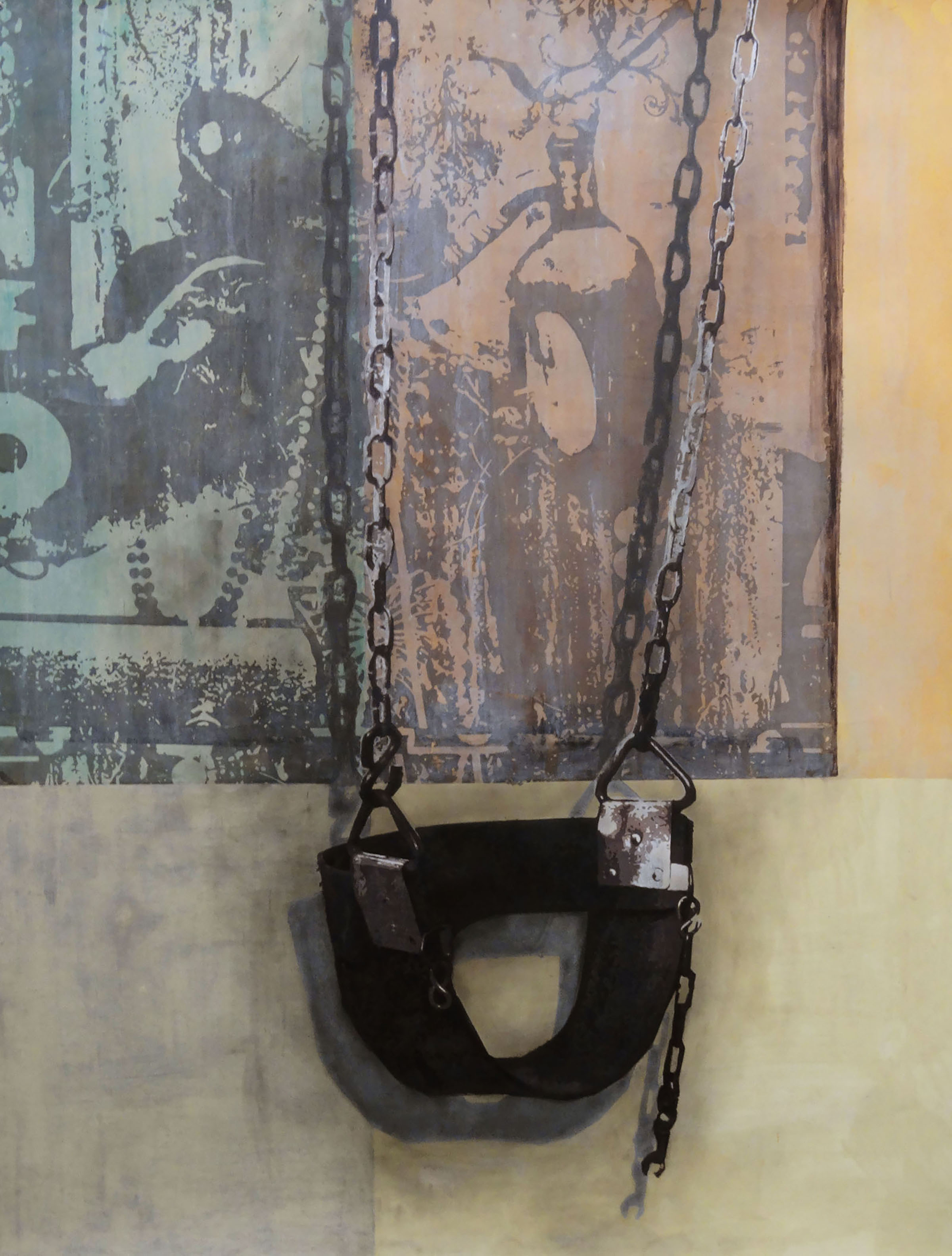 The installation — visible both indoors and out — features repeated images of the two swings, hand-printed on paper and painted in different colors.

Buie, citing incidents in Milwaukee and Chicago where children were murdered at the playground, said the work also explores playground violence and changing times where children are no longer safe.

“It started being about me and then it ended up turning up something bigger,” she said.

Now a full-time assistant professor and section chair of printmaking at the College for Creative Studies in Detroit, Buie earned her MFA from the University of Wisconsin-Madison and was the first black woman to win the Mary L. Nohl Fellowship.

The piece features an animated video projection displaying irregular letters and words on the wall, composed of working class vernacular juxtaposed with language of educated elite.

“The work is meant to bridge the gap between these two different subcultures — a gap that I have had to navigate myself in life,” Ikens said.

At 10 years old, Ikens joined his father in wood-flooring construction, and he pays tribute to his working-class background and the grueling work through his art. He starts with Asian-sourced bamboo flooring planks and uses dyes, stains and traditional finishes to mimic the look of antique wood. Then he scrapes, paints and defaces the planks and reassembles them into incongruous arrangements.

As a sci-fi buff, Krajniak is especially excited about Schmidt’s installations, which explore what it means to be transgender. Schmidt’s work incorporates geometric shapes, repeating patterns and themes from space culture, and is inspired by “visions from other worlds or higher dimensions, divined through meditation,” according to her artist statement.

Other artists in the exhibit include: Jillian Dickson Ludwig, currently the visiting assistant professor in drawing and painting at Alma College, and Dana Freeman, a professor of art at Aquinas College with a focus on abstract painting, photography, video and performance/installation. Her work is concept-driven and a response to her experiences and dreams.

The UICA doesn’t mind pushing the envelope and giving artists freedom to customize work once they arrive — so final details are often worked out days before the opening.

“We are really open to artists, especially if they are making new work,” Krajniak said. “If they are inspired or want to take a slightly different turn, we really welcome that. ... We’re really comfortable with the ambiguity.”

Tweet
Published in Visual Arts
More in this category: « Breaking Ceilings, Opening Doors: How and why local institutions are making art accessible Harlem is Here: Dawoud Bey brings the New York neighborhood to Kalamazoo »
Login to post comments
back to top