Art Avalanche: Five new Muskegon Museum of Art exhibits are opening at once

Art of the Motorcycle. Photo by Jennifer Green

Muskegon Museum of Art is opening a large group of eclectic exhibits in May, hoping to draw on the momentum from last summer’s record-setting attendance and appeal to a broad range of local patrons and regional vacationers.

American Icon: The Art of the Motorcycle
May 17-Aug. 12

Motorcycles will drive right into the museum this summer for an exhibition highlighting the artistry of the chopper and its place in modern culture. MMA organized American Icon to appeal to Muskegon’s motorcycle crowd and the thousands of bikers who visit for Rebel Road and Bike Time in July.

The exhibit offers a glimpse into the design and aesthetics of the motorcycle and how it’s changed over the years, from custom paint jobs and accessories to cultural imagery of the men and women who ride. The display includes Harley Davidson motorcycles and other rare and vintage bikes, including two early Henderson models and a 1909 Excelsior. Martin credits Clyde Whitehouse at Hot Rod Harley and other Muskegon area collectors for making the exhibition possible.

The work of Michigan photographers Bill Chardon and Jennifer Green round out the exhibit with photographs of Sturgis and Muskegon rallies, portraits and up-close details of bikes. 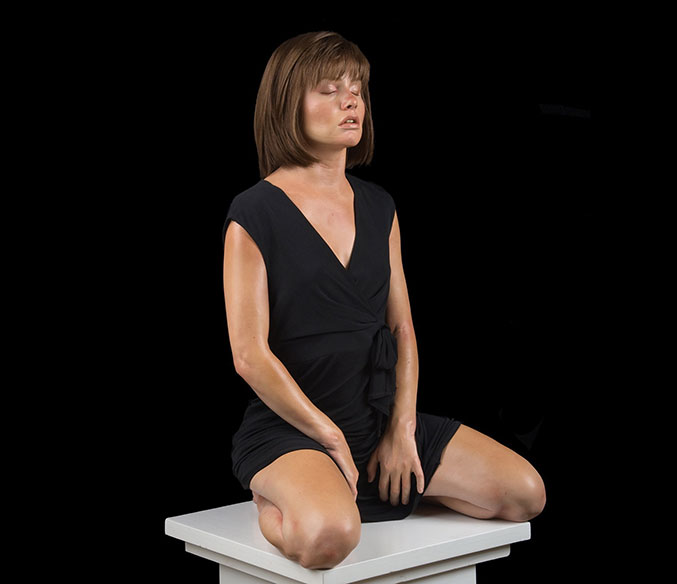 Up Close and Personal: The Ultra-Realistic Sculpture of Marc Sijan
May 17-Aug. 12

The exhibition features several full-size figures and head and shoulder busts. The sculptures are cast from real people and have a playful, relatable, fantasticalmappeal, said Art Martin, director of collections and exhibitions and senior curator.

“Largely, it’s the wonder and surprise and then the joy of discovery and contemplation of viewing them,” Martin said. “The first impression you get is, ‘Oh, that’s a real person sitting there in the corner, sitting on the pedestal.’ Once you realize they’re not real, then there’s that new level of exploration.”

Some of the figures at the MMA have been on display elsewhere, but the museum worked directly with Sijan to organize this special exhibition. He has a noted following worldwide, one MMA staff hopes will attract new visitors to the museum.

Sijan has a story in mind before he begins, then seeks out ordinary people to help convey it — an overweight swimmer in a tiny bathing suit, a bored looking security guard, a guy tumbling out of a crate, a woman meditating on a pedestal, a naked couple in an embrace.

“These are familiar narratives and so they invite a pretty immediate understanding,” Martin said. “He tends to focus on the average person, the kinds of faces and body types that you most frequently encounter.”

Sijan views his work as a record of form and spirit, giving careful attention to the face, an area the artist considers to be a visual record of a person’s life experiences. However, although he offers clues through poses, expressions and props, the ultimate interpretation of the story is left up to the viewer.

He makes a polyester resin cast from the plaster to create the final sculpture, enhanced with up to 15 layers of oil paint to simulate the translucency of skin. Hair, props, clothing and prosthetic eyes complete the final piece.

“The other fascinating part about it is all of the imperfections, the moles, the wrinkles, the freckles, the stray hairs, all of that minutiae of life that viewers immediately recognize in themselves,” Martin said. 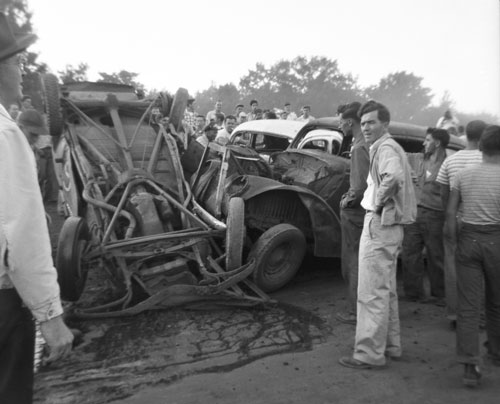 As a transition between Sijan and American Icon, MMA’s Whiskey Ridge showcases a slice of Americana and local racing history with a wall of photos by amateur photographer Dorothy “Dot” Thompson.

The black-and-white photographs capture the thrill and nostalgia of Whiskey Ridge Raceway, also known as the Newaygo County Speedway and Maple Island Speedway. The oval dirt track in Grant hosted popular stock car races from 1946 to 1960 and 1972 to 1976.

Using a Kodak Brownie box camera, Thompson, now in her 90s, took the photos during the summer of 1951.

“She was an amateur shutterbug, and it all sort of got tucked away,” Martin said. “They were moving her, and her family found the original negatives.”

Her daughter, also a photographer, contacted Martin to take a look. The 12 photographs on display capture the sense of speed and atmosphere of the popular pastime and spectator sport.

“They’re fun, (like) people standing around looking at a wrecked car,” he said. “It brings in some local history and ties that into racing, which was central to the development of motorcycles.”

In the Operhall Gallery, Picasso in Print features notable prints from the museum’s permanent collection and an anonymous loan. Four large Pablo Picasso prints are the focus, rounded out by other smaller prints from the famous Spanish painter and printmaker, along with early 20th century etchings and lithographs by Toulouse-Lautrec, Francisco Goya, Tsugouharu Foujita, Georges Roualt, Paul Cezanne, Pierre Bonnard, and Françoise Gilot.

“These represent a kind of golden age in European printmaking,” Martin said. “It recognizes this really significant loan and … it lets us highlight parts of our collection that, because they are on paper, just aren’t seen that often.”

150 Masterpieces from The North American Indian
May 24-Sept. 9

After the success of last year’s The North American Indian exhibition, the museum decided to pull together 150 of Curtis’ most notable images in honor of the 150th anniversary of his birth. The collection offers a sampling of the portraits, landscapes and Native American life captured in the comprehensive exhibition, which included 20 volumes of ethnographic information and portfolios with 723 photogravures.

“We did another wall of portraits because that is the best illustration of the humanity of the people who Curtis photographed,” Martin said. “Seeing a wall of faces is just a really powerful experience.”

Although much smaller in scale, the encore exhibit also examines criticism of Curtis’ work and enduring falsehoods.

“For all the beauty and preservation of culture that there is in (The North American Indian), there is also the creation and perpetuation of stereotypes,” Martin said. “In doing what Curtis did, he created an image of the Native American that was not always true.”

Tweet
Published in Visual Arts
More in this category: « Glass Attack: A day of glass-blowing and education comes to Kalamazoo Review: ‘Off the Wall’ is easily unique, fun enough to be an annual event »
Login to post comments
back to top