Above: A+ for Educators: Illustrations by Patricia Polacco. Below: In Pieces: The Art of Vintage Puzzles. Courtesy Images

Accomplished Michigan author and illustrator Patricia Polacco was once a little girl, Trisha, who saw jumbled words on the page and struggled with reading in school.

Her autobiographical book, Thank you, Mr. Falker, pays tribute to the special teacher who recognized her artistic abilities — and her dyslexia — and helped her succeed.

A+ for Educators: Illustrations by Patricia Polacco highlights several of Polacco’s books that honor educators who made a difference in her life. In a broader sense, this special exhibit organized by the Muskegon Museum of Art also celebrates the important work of educators everywhere who inspire and encourage their students.

“Each of us has that teacher that really moved us and helped us and changed us and allowed us to grow and become who we are,” said Catherine Mott, MMA’s assistant director.

Every winter, the museum features a book illustrator and original art from the books to show students how art becomes part of a story. A+ for Educators highlights sketches and illustrations from Thank you, Mr. Falker; An A from Miss Keller; The Art of Miss Chew and more.

Each book weaves in stories and obstacles Polacco encountered in her childhood: feeling dumb and teased in school, racism and diversity, a fear of public speaking, and being in a class of quirky misfits. The poignant messages, honest and sometimes uncomfortable to confront, remain relevant today and recognize the influential role of a great educator.

“She really has great empathy for students who struggle and were bullied,” Mott said. “Some of them have some pretty deep messages.”

Including circus spectacles and Pictured Rocks, a touring exhibition from Detroit Institute of Arts’ Manoogian Collection moves into the Operhall Gallery in mid February.

There are images of America’s most iconic attractions, including Niagara Falls, Statue of Liberty, Queen Mary coming into New York harbor, and “a really cool one of Pictured Rocks” by Thomas Moran, Mott said.

“It’s that idea of Manifest Destiny, moving west, highlighting things Americans were drawn to or used as propaganda,” she said. “(They’re) things that really are iconic America.”

Besides promoting collaboration and conversation, touring exhibits like this one allow the DIA to show work that may not be out all the time, turning on audiences all over to its collection, Mott said. 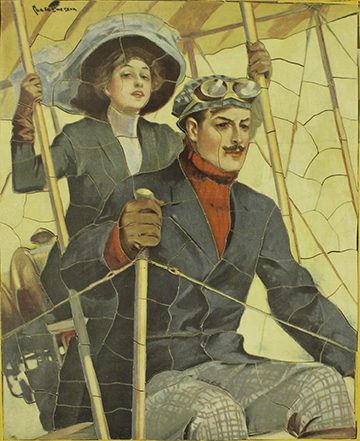 As art, vintage puzzles reveal the design capabilities and technology of the time and the images that informed peoples’ everyday lives.

In Pieces: The Art of Vintage Puzzles displays a variety of late 19th century and early 20th century puzzles framed and hung on the wall. Upon closer inspection, viewers can see puzzle pieces that lack the smooth, interlocking edges of modern versions. Some are cut into straight-edged rectangles, others dramatically different in size, and many have unique “figure” pieces in the shape of dogs, keys, circles, hearts, butterflies and clovers.

“The shapes are pretty easy to spot once you get looking,” said Art Martin, MMA’s senior curator and director of collections and exhibitions.

The pieces meld together to depict common scenes, including dogs, landscapes, ships, and also some golden-era type illustrations of pirates and knights. The MMA exhibit highlights the heyday of the puzzle, sparked by manufacturers across Europe and the United States marketing them as toys for children and adults, teaching aides, advertisements and promotional gimmicks.

“There was no Google,” Mott said. “It was probably a great way for people to explore different places and scenes and ideas.”

On display to the public for the first time, the puzzles belonged to the late Andre Aerné of Charlevoix. He avidly collected puzzles, stamps, ceramics and art, and the MMA hosted an exhibition of Aerné’s Clarice Cliff ceramics in 2010. The puzzles came from his estate, donated in its entirety to the MMA.

“Sometimes you come across these people with these really unique, eccentric collections; it’s an art form in and of itself,” Mott said. “It’s something very different but also celebrating the art of collecting.”

A+ for Educators: Illustrations by Patricia Polacco,
Jan. 31-May 12

Tweet
Published in Visual Arts
More in this category: « The Cycle of Service: How one artist reclaims and gives back In Bloom: Red Lotus Center for the Arts showcases local artists, promotes community »
Login to post comments
back to top