Changing Environments: Grand Rapids Art Museum focuses on how the world around us is changing

Above: Midnight Unicorn. Below: Blue Lake Pass. Above: Melanie Daniel Below: Maya Lin.

Inspired by nature and water, artist and designer Maya Lin makes thoughtful sculpture that asks viewers to look at their environment in an entirely new way.

Maya Lin: Flow opens this month at Grand Rapids Art Museum and features several large-scale sculptures and two new installations that focus on West Michigan and the region’s water supply. Lin has experience in that realm, being the artist and designer of Ecliptic, the multi-faceted public park in Rosa Parks Circle.

As a committed environmentalist, Lin is deliberate in her use of materials, working with recycled silver, steel pins, wood and other building materials. Her ultimate design, scale and layout is also well-researched and mapped out.

“She uses a lot of scientific practices and mapping,
charting and things that allow her to visualize the world in ways that we haven’t seen before,” said Chief Curator Ron Platt. “She has a really intuitive sense of materials and how to frame things.”

“To isolate it like this and transform it through these materials, it’s just a whole new way of thinking and looking at our environment,” he said.

A shimmering wall relief titled The Traces Left Behind (From the Great Bear Lake to the Great Lakes) (2019) is cast from recycled silver. The work charts the span of
contemporary bodies of water from the Arctic to the Great Lakes, formed by the melting of the Laurentide Ice Shelf, and highlights the geological forces that created them.

Lin, a New York-based artist and architect, rose to prominence for her design of the Vietnam Veterans Memorial. In 1981, as a 21-year-old Yale University student, she entered and won the public design competition.

While she is most well-known for her historical memorials and public buildings and sculpture, her work honors the natural world. She explores themes of environmental change and decline, aiming to raise awareness for the environment among people in urban spaces, and the crucial role of water to global survival.

GRAM reached out to Lin’s studio to organize the special exhibition at GRAM, in part to commemorate the upcoming 20th anniversary of Ecliptic. The nearby Grand River directly inspired Lin’s design of the space. She incorporated unique water features in three different forms — liquid, solid and vapor — through the park’s ice rink and amphitheater, mist fountain and a table of flowing water.

The museum overlooks the 3.5-acre park, which has become a popular hub of activity in the city.

“Ecliptic at Rosa Parks Circle is Maya Lin’s first park, and I think that that was a real impetus for this exhibition,” Platt said.

In June, the museum will host a presentation and community conversation about the park, with some models and video about Lin’s design process and how it relates to her other work. “It’s sort of two exhibitions in one,” he said. “It’s all very thoughtful. It’s a very popular site, and the more people can know about it, people will love it even more. 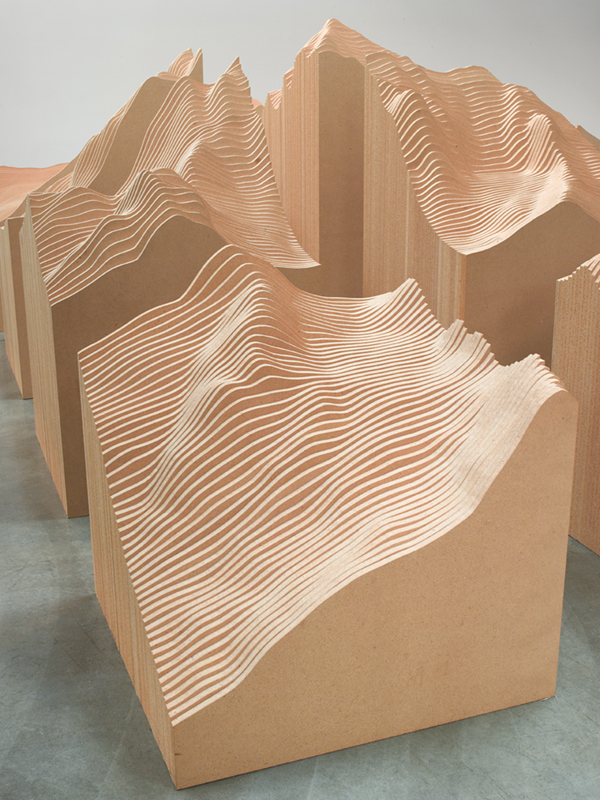 In a separate environmentally conscious exhibit, artist Melanie Daniel envisions a world on the edge of destruction because of overconsumption and trashing of the natural world.

The title refers to the effects a 4-degree Celsius rise in average temperature could have on the planet. Despite scientific evidence of global warming, Daniel said most people have a hard time grasping what it will look like in the years to come.

"This show is about two dirty words that worry most millennials and make all politicians squeamish: climate change,” Daniel said. “We have completely forgotten the role we are supposed to play in the natural world.”

Although Daniel’s colorful, vibrant canvases have a playful nature, they also show dense areas of busy, vibrating patterns, disappearing plant species isolated in terrariums, and people trying to adapt to a post-cataclysm world. Some depict drought-stricken landscapes, while others are inundated with plants and very lush, hinting at the resiliency of nature.

Born in British Columbia and based in Israel, Daniel is in Grand Rapids as the Padnos Distinguished Visiting Artist/Professor at Grand Valley State University. She will give a gallery talk from 6-7 p.m. on May 23.

Her large-scale paintings and works on paper are new works for this Michigan Artist Series exhibition. They don’t portray doomsday imagery, Daniel said, because that would be too obvious and it isn’t very interesting. Audiences instead can expect to see “retina scorching color."

“I prefer to make maniacally colorful landscapes that celebrate the characters in their attempted resistance,” she said. “It’s a double-edged sword: daily life and its usual routines and creature comforts act as a kind of balm, but also a kind of blind spot.”