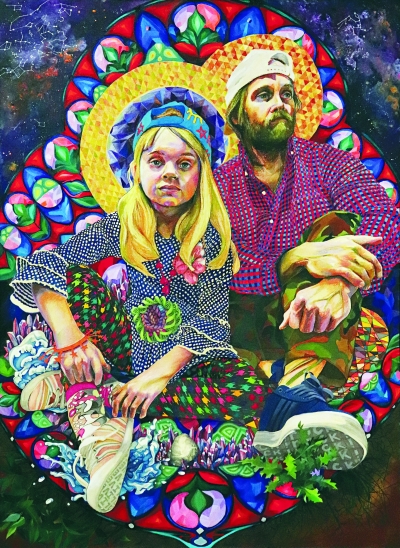 The Muskegon Museum of Art has more than one ambitious exhibition taking over its remodeled galleries throughout the coming months. Whether you’re looking for the best Michigan-made art or would just like to contemplate death, the MMA has you covered. We talked with the staff about what makes these shows worth visiting — maybe more than once.

While the name has changed, the museum’s 91st Michigan Contemporary Art Exhibition carries on the long tradition of showcasing and promoting Michigan artists.

The Michigan Contemporary, on display through Nov. 13 in the main L.C. and Margaret Walker galleries, offers a fresh and contemporary look at work being made by living Michigan artists.

Formerly known as The Regional, the MMA debuted the new name this year to better communicate to visitors and guests what the show is about. The exhibition is the longest-running juried show of its kind in Michigan and accepts talented beginners and accomplished professionals alike.

“It’s meant to be a look at what living artists in Michigan are looking at, inspired by, what they are trying to say and communicate,” said Art Martin, director of collections and exhibitions and senior curator. “One of the things we try to do with this exhibition is bring new audiences to our Michigan artists.”

The 2019 show includes 125 works by 107 artists from all over the state. The museum switched to a digital-only format a few years ago and received a record number of 734 entries by 406 artists this year. Most artists live in the West Michigan region, but a growing number are from other areas such as Detroit and Ann Arbor, Martin said.

An independent juror selects the pieces for inclusion, and the museum awards cash and prizes to top finishers. Juror Amy Chaloupka serves as Curator of Art at the Whatcom Museum in Bellingham, Wash., and an art/art history instructor at Western Washington University.

In her Juror Statement, Chaloupka notes that she was “truly astounded by the caliber and range in the grouping of over 700 works of art” and “I saw interesting patterns and connections between works that felt regionally specific yet universally resonant.”

The walls and cases display a variety of media, including contemporary paintings, unique mixed-media, 2D and 3D entries, quilted pieces, graphic arts, sculpture and more. Most of the art is available for purchase, giving visitors the opportunity to support artists in a financial way as well.

The artists tackle a diverse array of themes and express subtle and not-so-subtle social and political commentary. Some works are fun and playful. Others explore family traditions and make statements about cultural and environmental issues gripping our nation.

“It is a really sharp show on several levels,” Martin said. “We’re pretty excited about the way it looks this year.”

Martin said there are some conceptual ideas that play out in the show based on the juror’s picks, and having someone from out of state is “a great way to bring an outside perspective to what is happening.”

In addition, all the galleries have been remodeled, bringing a new, fresh energy to the entire museum.

“There is a different feel to the space for people who haven’t been here for a while,” Martin said. “We are living and dynamic and looking ahead.”

When Muskegon Museum of Art Preparator Lee Brown was looking for tattoo ideas, he stumbled on some “very intriguing paintings of skulls” that prompted the idea for an exhibit.

Martin got to work researching and reaching out to artists who work in the memento mori motif.

This fall, MMA presents Undying Traditions: Memento Mori, an exhibition that explores morality and mortality using the human skull, bones and other symbolism. Undying Traditions features work by artists from across North America. The exhibit includes paintings, photography and sculpture, along with early prints from the museum’s permanent collection.

For centuries, artists have used still-life imagery — particularly the human skull with flowers, fruit, birds and other symbols of time and decay — to explore themes of earthly pleasures, death and the afterlife.

“It’s enduring imagery,” Martin said. “Artists return to these ideas over and over again, and people continue to appreciate the images.”

A Medieval Latin Christian philosophy, memento mori literally means “remember death” and encourages people to reflect on death and dying while they are still living. Centuries ago, people had limited literacy. They used these images to remind people that death is assured and they should focus on their spiritual afterlife, Martin said.

This tradition includes the danse macabre, a skeletal Death dancing away with the rich and poor alike, and the vanitas, a memento mori that depicts objects associated with physical pleasures such as musical instruments, books, food and wine. It is the idea that “all of these pleasures you are enjoying, none of that is going to help your soul,” according to Martin.

Martin said imagery of skulls and bones continues to inspire artists and fascinate viewers. Some artists incorporate modern elements, such as technology, or depict flowers with bugs moving in and out of them and food in various stages of decay.

As for why? “I can speculate people are aware of their own mortality, and so these images remind us of that in ways that still seem to resonate,” he said.

Besides prompting conversations about death and the afterlife, the “art is just cool and incredibly well-made.” The exhibit also lends itself to some fun and unique programming, Martin said.

“There is certainly a lot of philosophy behind the work and history behind the work, but it’s also visually entertaining,” Martin said. “We picked artists who are making technically accomplished and visually beautiful work.”

Related programs include:
● Open Mic Night with local poet Kumasi Mack, 6-8 p.m. Oct. 10. Mack, alongside his DJ and two featured artists, provide a night of spoken word pieces that relate to themes in Undying Traditions. Crowd participation is welcome. Free.
● Brown Bag Film Food for the Ancestors: The Mexican Celebration of the Days of the Dead, 12:15 p.m. Oct. 24. This PBS film explores the fabulous Day of the Dead festival as it is celebrated in the culturally rich state of Puebla. Free. Paid admission required to enter galleries.
● Passion and Perversity: The Inner Chambers of Edgar Allan Poe, 6 p.m. Nov. 2. Conceived, arranged and performed by Tom Harryman, this one-act play examines the inner workings of the master of suspense through Poe’s letters, stories and poems. $12 advance; $10 MMA Member; $15 at the door.