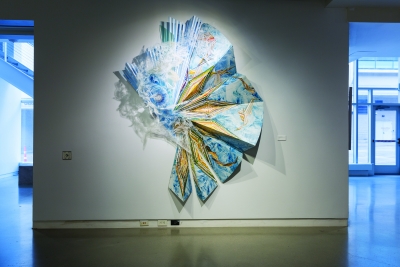 It’s a rare, special occasion when the two big art organizations in Grand Rapids team up.

This fall, the Grand Rapids Art Museum and Urban Institute for Contemporary Arts are doing just that with collaborative shows spanning galleries in both buildings. Paintings, drawings and large sculptures have all moved in as a paired curated experience.

In the GRAM, you can see mainly 2D pieces such as paintings, while in the UICA, you’ll see plenty of 3D pieces made from a variety of materials.

“We wanted to focus on the works of different mediums, so we have works made with fibers, sculptures, et cetera,” said Juana Williams, the exhibition curator for the UICA.

The unique collaboration is due in large part to a special guest curator at the GRAM: Williams herself. The Detroit native came in with the idea for showcasing contemporary abstract art at the UICA while delving further into the GRAM’s abstract collection, pulling out pieces that are new to the community.

“That’s one of the great reasons we bring in new eyes (like Williams). She found a couple gems that we hadn’t noticed before this collection,” said Jennifer Wcisel, the assistant curator at the GRAM.

If you’ve been an avid visitor and member of the GRAM for any amount of time, you know the collection is massive. So massive in fact, it’s hard to actually display many of the pieces. For this collection alone, at least eight pieces will be displayed for the very first time at the GRAM.

“Our entire collection is over 6,000 objects, so we are always discovering new things,” Wcisel said. “Having Williams do some of that research was really helpful.”

Wcisel also mentioned that although she has been curating for four years at the GRAM, she herself has not seen the entire collection. It’s almost a guarantee you will find something you haven’t before.

Though many of us haven’t heard of them, many artists in Relevant deeply influenced the contemporary abstract movement in America. The collection is full of artists who didn’t get the attention they deserved because of their titles or who they were in society, according to Wcisel.

“I know Juana was very careful to pick some works for the diversity of the artists,” Wcisel said. “She selected as many women as she could, being that they were underrepresented in the time period, but also chose some artists of color, who we always love to highlight.”

In this process, Williams also took into account why the pieces themselves were created.

“I wanted to focus more on the mediums of these pieces for these shows,” Williams said. “It’s more about the material and the process of creating the works. Of course each work has its own story, a more complex meaning behind why and how it was created.”

One artist they’re happy to showcase is Mavis Pusey, who passed away earlier this year. The GRAM was thankful to receive some of Pusey’s works, particularly as not many people know who she was. Wcisel was especially excited to see this work as it felt it was “meant to be” for the art style.

“It’s a name not many people know, but we’re finding she fits right into the whole story of abstract art in America,” Wcisel said.

While the GRAM collaborates often with other places in Grand Rapids, Wcisel said this new collaboration is especially exciting. It’s the first time in a while that the museum has invited an outside curator in to do a show.

“It’s always nice to get a fresh perspective from someone who isn’t here day-to-day, who has different ideas and who sees our collection in a new way,” Wcisel said about Williams. “Juana came in with this idea about abstraction and all the digging she did unearthed some really interesting pieces that wouldn’t have been on view otherwise.”

The collaboration has also given the GRAM the chance to reframe and clean other works that were hidden in their archives, and has inspired them to incorporate more of those works into their rotations of exhibitions.

As for the UICA, the shows are an opportunity for the institute to spread its reach in more ways than one. Visiting one show will likely make you want to visit the other — after all, it’s just a short walk down the road. GRAM’s show provides context and history for the UICA’s Spectra, which is full of contemporary, larger-than-life art that may make you feel like you’re living inside the work itself. Thanks to collaboration, you get the best of both worlds.

Tweet
Published in Visual Arts
More in this category: « Celebrating Life, Death and Talent: Muskegon Museum of Art showcases a huge variety of art this fall Head Toward the Light: Saugatuck Center for the Arts welcomes viewer participation with ‘Luminescence’ »
Login to post comments
back to top