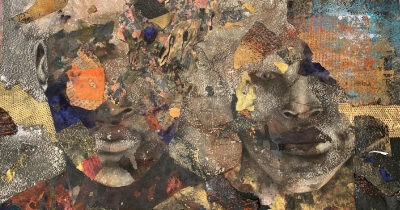 Last month, an exhibition titled Translating Valence: redefining black male identity opened at UICA. Consisting of work by black male artists, it focuses on black masculinity: both how it’s seen from the outside and the way it feels from within.

This month will see the debut of a similar exhibition, A Beautiful Struggle: Black Feminist Futurism. While it shares some similarities with Translating Valence, it also incorporates magical realism and technology.

We talked with Juana Williams, curator of both exhibitions, about how these shows came together and what they mean in the modern context.

How did you determine what artists, and which pieces, to include in Translating Valence?

When I decided on the theme of Translating Valence, I wanted to be sure to include artists whose work was different aesthetically, but more importantly, I wanted to feature the artwork of artists who were portraying very different narratives through their work. I used a similar process when deciding on which specific works to feature. However, I also focused on which works most aligned with the theme of the exhibition. I know I can’t be all-encompassing when discussing a group of people, but I keep in mind the importance of sharing multiple narratives, always maintaining a connecting thread through the works.

The exhibition comments on black masculinity, including stereotypes of it. Is there a piece you feel is particularly effective in its interrogation of those stereotypes?

It’s sometimes difficult to understand the underlying meaning of works by simply viewing them. Although all of the works touch on this idea in some way, Devan Shimoyama’s work is visually most obviously in contrast to ideas of hypermasculinity. One visual element that he uses in many of his works are tears. “Crowned” includes tears coming out of the figures’ eyes. He uses a teardrop motif to celebrate vulnerability. Through his work, he creates spaces for males, especially queer Black males, to decompress and be themselves. While those opportunities may necessitate crying, the motif is not literal or only to be understood as representational of tears. He simply attempts to celebrate sensitivity in Black males and the desire for more of it to be visible.

Is there anything about our current historical moment that makes this exhibition particularly relevant? Would it have been a different exhibition five years ago, or 10?

The overall theme of the exhibition and the underlying elements of each work are not new ideas. I would argue that Black male identity historically and even in more contemporary times has been predicated on Eurocentric ideas that have intensely permeated our culture and society. Black men, throughout time and across the globe, have made efforts toward self-defined identities and highlighting narratives that negate stereotypes, at least since the Colonial era. However, these efforts have been reflected in numerous ways throughout time.

There are periods of time in history that I would expect a related exhibition to be portrayed differently. During the Black Arts Movement and Civil Rights era, for example, the idea of unity within the Black community was a much more prevalent focus than individual narratives. The underlying idea of Black Nationalism, while not inherently gendered, encourage some stereotypes of Black masculinity. So, some of the specific themes in the works included in Translating Valence may not have been portrayed in an exhibition during that time period.

How have modern events affected the conversation around those stereotypes then?

The murder of Trayvon Martin and development of the Black Lives Matter activist movement seemingly created a renewed spotlight on the issues. The current political climate seems to have also increased perpetuations of racist ideas and acts of violence against Blacks. These more contemporary occurrences have shifted the sociopolitical climate in the U.S. and play a role in the relevancy of Translating Valence during this time period.

My hope is that the audiences will answer this question. I will say, there was intentionality in scheduling the exhibitions to overlap for a period of time but I think explaining why may influence experiences of the viewers in a way that I don’t believe is wise. I’m curious how the exhibitions are understood in connection to one another, and separately.

Of course, the hope is that self-defined identities of Black womanhood, even with a focus on Afrofuturism, can spring solely from a place of celebration. However, there are so many elements in our experiences that can’t be ignored when expressing experiences. The exhibition is meant to explain how identity can be celebrated without intentionally focusing on negative stereotypes or instances of marginalization.

I wouldn’t say the exhibition is wholly celebratory or wholly corrective but I don’t know that I can accurately measure to what extent it’s either. The two topics can work hand-in-hand; one can result from the other. A Beautiful Struggle is meant to focus on unique characteristics of Black womanhood and experiences of Black women. In turn, it may disavow racist white normative ideology but that is not the overall objective of the exhibition.

So any correction is mostly incidental, really.

I don’t believe blackness always has to be explained or examined in reference to whiteness or any other race. So, I was deliberate about not focusing on displays of oppression or otherness. Instead, I curated the exhibition with the understanding that Black women are complex. All is taken into consideration when explaining different experiences of people who are both Black and women, yet, this exhibition seeks to center Black women’s self-defined identities without necessarily being responsive.

Representation of black culture in art museums has left something to be desired, historically. Is this changing?

It appears that more institutions are beginning to recognize the tremendous importance of discussing a variety of perspectives and narratives. However, in my opinion, the art world is not shifting enough.

What obligations does UICA have to get this art, and good art in general, in front of people who might rarely if ever enter a museum?

That’s a complex question that is somewhat out of my purview of expertise. I curate exhibitions for all audiences. I do have a special interest in understanding how to make UICA welcoming and inviting to individuals who may not typically visit art institutions because they don’t feel they belong. I think all art institutions should be concerned about their audiences and who is missing from those demographics.

Tweet
Published in Visual Arts
More in this category: « Gallery of Glass: GRAM’s winter exhibition shows off the beauty of a versatile material Oh, the Humanity »
Login to post comments
back to top