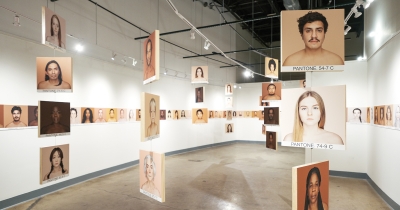 At first glance, viewers may think the portraits in Humanae focus solely on skin color.

The project challenges the myth of race and promotes dialogue and self-reflection around beauty and ethnic identity, but the most important information about the exhibition is the lack of information, said Whitney Valentine, SCA’s education and exhibitions manager.

“We as viewers don’t know who is poor, who is rich, what the person’s sexual options or beliefs are, who is a migrant or not, who is local or not, who has disabilities,” Valentine said. “The simple and profound idea is to celebrate diversity.”

Dass is an award-winning photographer living in Madrid, and Valentine reached out to her last year to see if SCA could host Humanae. The exhibition has been to 63 U.S. cities, including New York, Boston and San Francisco.

It’s also an ongoing project. Dass started in 2006 and continues to take portraits of various subjects during her travels. The images were created in 33 cities across 19 countries and counting. The people represent a broad cross-section of humanity in a showcase of diversity: an occupant of the Forbes list, residents of Rio de Janeiro’s favelas, Swiss students, refugees who have crossed the Mediterranean, newborns and the terminally ill.

The project captures the color wheel of humanity, Valentine said. The collection of simple portraits shows humanity’s true colors are far from black and white. According to Dass, “Humanae represents a sort of mirror for those who cannot find themselves reflected in any label."

Dass has amassed more than 4,000 portraits so far, and the SCA’s display includes 160 of them. There are dozens that have never been exhibited before, including portraits Dass took this past December. The pictures line the room, creating a visual embrace, with eight mobiles floating throughout.

Arranging the portraits in a mobile-like fashion invites the viewer to interact with the subjects in each photo and reflect on their own sense of self and their connection to others.

“Mobiles are connected to childhood, a time when we begin to build stereotypes about what is different from ourselves,” Valentine said. “This way of displaying the work connects us to a sense of both play and pain, as we subconsciously make a return to a time in life before our minds actively assessed the differences among us.”

Valentine said the exhibition “beautifully celebrates our relationships with one and other.” SCA wanted to bring the thought-provoking show to West Michigan to celebrate race, religion, color and the diverse beauty of human colors.

“We are all connected,” Valentine said. “We are all much more similar than we often recognize.”

As a community arts center, SCA’s gallery space sparks a ripple effect of education, conversation and connection for the community, and especially for youth. The Humanae project has a spinoff nonprofit institute and outreach program, empowering global educators to be a voice for change and stand against discrimination. The program helps educators create safe spaces for students and the communities in which they reside to discuss issues around identity, race and inclusion.

“We are honored to bring an exhibit and message of this caliber to our city and the larger Midwest community,” Valentine said. “It’s so important to cultivate our resources, time, talents and energy into creating space to reflect on our identities while nurturing our youth to be more empathetic citizens.”

In conjunction with the exhibition, Valentine invited Artist-in-Residence Hector Acuna to display his work, Alien Nation, in the Corridor Gallery. He will lead area school workshops, encouraging creative expression and authentic conversations around race, cultural identity and ethnicity, and help bring Humanae’s message and mission to life for local youth.

“Through a lot of my work, I am trying to represent the complexities of the influences in my own life and how that relates to my own sense of belonging and my own place in the world,” Acuna said, adding that he’s excited and honored to participate.

Acuna has faced his own challenges as a Mexican-American who grew up on a farm and lived with his mother’s family in Wisconsin. Many of the schools served by SCA are in economically challenged rural areas with migrant populations.

Acuna’s Mexican-born father was incarcerated for most of his life, and while Acuna does get looks and questions about where he’s from, he said he had a traditional, middle-class American upbringing.

“That rural landscape is definitely the backdrop of a lot of work I create. My whole memories growing up are without my father, and yet my physical features and my name lead people to assume I have a different background.”

Acuna's work comes from a very personal, autobiographical perspective and explores “this confliction between who you are and who people assume you are going to be and the positive and negative agency within that.”

“There is quite a bit of range in terms of media and style,” Acuna said. “The figure as subject is in everything. A lot of them are self-portraits or portraits of people in my family.”

Acuna continues to come to terms with his own identity — and frustrations around how he is perceived by others — and hopes to offer insight and inspiration to the students served by SCA’s outreach programs.

“Through the drawing process, each of the students will gravitate toward some sort of representation that they like,” he said. “In general, my hope is it allows the students just another way of creating artwork that allows them to speak from their own experience. A never-ending source of inspiration is our life and our experiences and our own histories.”

In the workshops, students will create three-dimensional self-portrait puppets and display them during the Feb. 28 reception.

“The SCA is excited to provide a platform for local youth to share their personal voices in a vulnerable and creative way,” Valentine said.

Much like Dass, Acuna creates artwork from his own truth, and he does so in a thoughtful and playful way, Valentine added.

“We hope Humanae and Alien Nation invite viewers to rethink how we see each other; to actively engage, question, and wonder … ‘What do I make of this, how do I feel about it, what might I do in response?’,” Valentine said.

Acuna will attend the Feb. 28 reception that features the students’ artwork and a public concert by The Reminders. The acclaimed musical duo are making their West Michigan debut, performing a mix of spoken-word rhymes and reggae hip-hop beats in the center’s theater. It’s the perfect day to see the exhibition and get the most out of your visit, enjoying the art with others in the community.

Tweet
Published in Visual Arts
More in this category: « Beautiful Blackness Butterfly Birthday »
Login to post comments
back to top