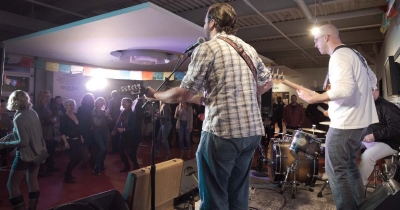 Saugatuck welcomes reality with a film festival and installation in March

Each year, the Real to Reel Film Festival brings crowds of people to Saugatuck, where they take in art, participate in activities, and rhapsodize about, frown at, and argue over movies. In an era when you can watch a movie while taking a bath, there’s value in getting out among like-minded folks; if nothing else, there’s no danger of dropping your phone into the tub.

The festival will be home to more than 65 films, largely part of Mountainfilm on Tour, a series of films focusing on outdoor adventure. Many of the films are inspirational, or educational, or both; all of them are short, many just a few minutes long. Subjects range from women who climb mountains to Detroit residents who keep bees. Spectacular visuals are a given.

The festival officially launches on March 21 with “Films For Families,” which offers 90 minutes of films curated for all ages. Animals from John Ball Zoo will be part of the fun, and attendees will be encouraged to try their hands at projects and climb Mt. Baldhead. For the week after that, thousands of students will visit the theater for a week of films.

On March 27, Megan Altieri’s Sonder will go on display to the public. Not a film, but an art installation, Sonder debuted at ArtPrize in 2018. It was a collection of clothing onto which Altieri had hand-stamped snippets of conversation she had heard in passing, everything from “he has epilepsy, so that’s not easy” to “I’m pretty liberal, just give me salmon.”

Encountered outside after passing through rooms of other (often less satisfying) entries, Sonder was as refreshing as a cool glass of lemonade. It was surprising, witty, sometimes laugh-out-loud funny, sometimes heartbreaking.

The installation launching at the Real to Reel Film Festival will feature more than twice as many pieces as before. Altieri has taken the best of her prior work and added more to it. From 6:30-7:30 p.m. on March 28, she’ll demonstrate the printing process, talk about the exhibition, and autograph copies of Sonder: The Art of Empathy Through Eavesdropping, her newly released coffee table book. Attendees will be able to try on the clothing. This worries her less than it does me.

“I guess it’s possible that clothing could be damaged,” she told me, “But whatever! It’s all in the spirit of connection. I want people to step into these stories, to feel them as intimately as possible.

“Several pieces were actually stolen during ArtPrize, but honestly that didn’t bother me that much. They obviously felt a connection to the piece. All that to say, connection is more important than preservation.”

Altieri found that working on the project changed her. “I find myself tuning in to my environment more than I ever have, and realizing just how much private information people are willing to share in a public space. It’s made me much less judgmental. Not even necessarily because I’ve reached new heights of compassion, just because it’s becoming more natural for me to consider hypotheticals or reasons for someone.”

Her piece is born out of curiosity, empathy and a willingness to engage without preconceptions; it isn’t film, but in every way that counts, it’s a spiritual sister to the films that will be onscreen. And it’s an important one, especially now, when the opportunity to cut ourselves off from the world around is greater than ever.

“The festival is a platform for building community,” said Whitney Valentine, education and exhibitions manager for Saugatuck Center for the Arts.

“That’s really the goal: How can we be a bridge and conduit for community?”

Planning for the event began more than a year ago, prior even to last year’s festival. Many man hours and much coordination went into setting it up. The goal was to create an experience: From the moment visitors enter the center, Valentine wants them to see good art, smell delicious food, and know that they’re somewhere special.

“Everyone loves film,” Valentine said. “It’s for everyone. And the films we’re lucky enough to screen this year are terrific. Super high-quality, high-caliber, curated for themes and topics that our community cares about: outdoor adventure, equity, indomitable spirit. (They’re) thoughtful, amazing films that tell stories.”

One such story is told in By Hand, the feature film of the festival, screening on March 27. The film captures the journey of two twin brothers who decided, why not, to ride paddleboards from Alaska to Mexico. Mexico is not a quick plane from Alaska. It’s really not a quick paddleboard ride. Still, they set themselves a challenge and they accomplished it. For what they took from the journey, you’ll have to see the film.

The film, of course, is a celebration. So is the festival. The next day, March 28, hosts the big day of short films, with three venues showing 65 films from Mountainfilm on Tour, all exploring equity, the environment, adventure, and curiosity.

Referring to her own work, Altieri said, “It’s about empathy, but it’s really just about curiosity. Being curious about each other makes room for empathy. We can’t feel for each other if we don’t want to know each other.”

Tweet
Published in Visual Arts
More in this category: « Butterfly Birthday Opening the Vault »
Login to post comments
back to top