Home Is Where the Art Is: UICA’s Big Move 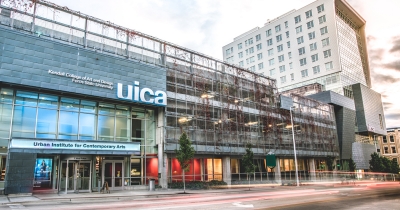 On June 17, the Urban Institute for Contemporary Arts announced that it would be moving from its current location at 2 W. Fulton Street in Grand Rapids to The Fed Galleries at 17 Pearl St. NW.

“(T)he current location is too large and expensive for us to maintain,” UICA stated.

We asked Miranda Krajniak, executive director of UICA, about what prompted the move and what it means.

“The pandemic had a direct impact on the decision,” Krajniak said. “It was no secret that UICA struggled in that building since it first opened, due to the vast size, scope and expense.” But the closure prompted by the pandemic deepened existing challenges. “It made us take a hard look.”

“You cannot underestimate people’s attachments to buildings,” she said. The Fulton building is sleek, beautiful and serious: an imprimatur guaranteeing that the work on display deserves to be seen. Prior to its opening, Krajniak toured the building alone, moved by the honor of getting to work there.

But this was not UICA’s first home. Even as she had walked through 2 Fulton, others in the community worried: How would UICA maintain its ensouled state if not on Sheldon Boulevard any longer? Interviewed for The Rapidian in 2013, she acknowledged the difficulty of change. “There’s a lot of nostalgia for the old building,” she said, words that apply as well to now as then.

As UICA begins to work through what the move will entail, constituents have told Krajniak about programs and aspects they missed when the organization moved from Sheldon to Fuller, including a local writer’s club. The voices of the UICA community will be important in determining what can move to Pearl, since it can’t be everything.

“The gallery has some small space constraints,” she acknowledges. The biggest challenge may be how UICA displays films. The Fulton building has a professional theater, allowing UICA to bring small, smart and powerful films to a community that otherwise would not have been able to see them in a theater.

Director Joel Potrokys wrote on Facebook that UICA was the first place to support his films. More than that, they fostered a film community. “They allowed me to see some of my longtime favorites on the big screen for the first time, like Eraserhead and Demons. They fostered independent work from Michigan filmmakers with their Open Projector Night, giving so many young storytellers their first big screen experience.”

The Pearl Street building will not have a professional theater. The question has become this: How does UICA display films? “We have to think about it in new ways,” Krajniak said. “Maybe we display films on different surfaces. Or maybe outdoors. We’re not backing away from film. But we need to do it in a new way.”

Along with challenges, the move brings opportunities. There will be abundant access to classroom space, and the ability to expand existing family programming and cultural tours.

For Krajniak, whatever UICA will do, communication is key. “I’m a temporary trustee of UICA. I exist to secure it for the future, and to keep it moving. I’m not going to lie, I loved working in that building. But I’ve had my time of mourning, and I’m ready to move on.”

Tweet
Published in Visual Arts
More in this category: « Waiting in the Wings Bugging Out »
Login to post comments
back to top