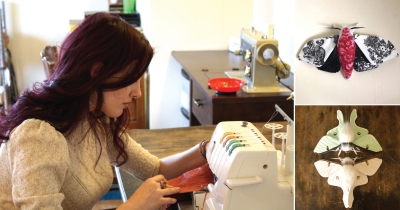 At one time, she had what she calls the standard nightmares: “Swarms of things, giant spiders, maggots everywhere, et cetera.” But not lately. She no longer fears bugs.

Now, she makes them.

Full disclosure: Burgess is a friend of mine. It’s a terrible thing to learn that a friend makes art, just as it’s terrible to learn that they write or act. (After all, they might be terrible.) Thankfully, she’s the rare exception — the real thing, someone with steady hands and clear eyes. I am writing this in my den; above me, on the second floor, a brass-eyed fox she brought to life is in his.

Years ago, Burgess decided to create a soft-sculpture cicada for her friend Sarah May Jones. Burgess knew it was possible, having encountered various soft sculptures of insects. “It did not go well,” she said. It took various patterns and prototypes before she made one that passed muster.

Since that time, she’s made a lot of bugs. Hundreds. Maybe a thousand. They run the gamut from rigorously precise to fanciful and fantastical. The fabric used in their creation might be true to nature, or it might feature the knowing eyes and well-architectured hairdos of Victorian women. Some are painted, some are bare cloth. When listed on her Etsy site, they can sell out within minutes.

At first, she used reference photographs when creating the sculptures. She still does, if working on a new species, but she doesn’t require them for old friends like bumblebees or the Luna moth. There are no reference photographs for the creatures she makes up, of course. Still, they have an underlying fidelity to nature. Burgess is fascinated by the inner workings of insects. And while that knowledge may not be readily evident in her work — they aren’t filled with fabric organs, after all — they evince careful study.

Lately, she’s tried her hand at the humble sea slug. “The variation in colors and shapes of these little guys is wonderful and fascinating.” One slug photographed for her website has eager antennae, a tail or trail of small circles, and fabric as deeply colorful as a NASA photograph. It looks as likely to slither across the ancient riverbeds of Mars as across the ocean floor.

Years ago, she began working on a tarot deck with artist Nicole Trim (drawings by Burgess, art by Trim). Preliminary drawings combine visionary iconography with a mastery of line and anatomy and could be illustrations by a naturalist gone mad. Someday, we might see the finished work.

Like everyone, Burgess finds her life changed by the pandemic, though it hasn’t been changed much. For the past two years, her online sales have been strong enough that it hasn’t been necessary for her to attend craft shows. A couple of gallery shows have been canceled or rescheduled, but online sales remain strong enough to allow her to continue supporting herself solely through her art.

It wasn’t a natural choice for a woman who used to be afraid enough of bugs that even a butterfly would make her nervous. But in learning, re-creating and reimagining them, she’s conquered her fear, much as a would-be singer might conquer her stage fright only to find herself touring for a living.

Last summer, Burgess took a two-week cross-country road trip. “There was a lot of embroidery done in some very lovely places”: Bozeman, Montana; the Black Hills of South Dakota; and, most memorably, Orcas Island, off the coast of Washington state. Surrounded by trees and the sounds of the Pacific Ocean, she worked on her tributes to nature.

Tweet
Published in Visual Arts
More in this category: « Home Is Where the Art Is: UICA’s Big Move Galleries Galore »
Login to post comments
back to top